Summer kicks off in NYC with dangerous heat wave 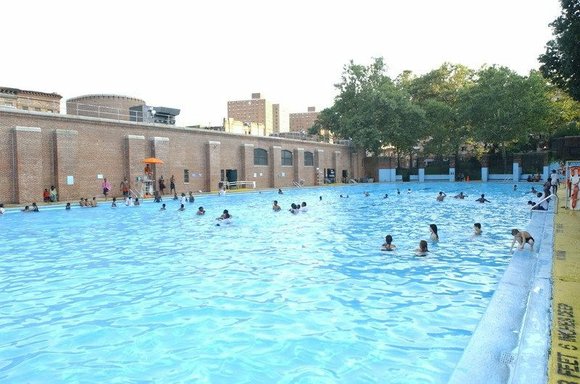 Fire hydrants blasting water in city streets and the sound of humming air conditioners can only mean that summer has arrived in New York City.

The hot season officially started on June 21, and Mother Nature didn’t spare New York and the rest of the Northeast from extreme heat. Temperatures climbed into the 90s this week with heat index temperatures either at or close to 100.

Temperatures started becoming dangerous on Friday when the high reached 92 in the city. The heat wave continued through the weekend when daytime temperatures reached a scorching 96 degrees making it perfect for local swimmers and beachgoers.

By the start of the workweek, temperatures stayed in mid-90s. The heat wave prompted the National Weather Service to put an Excessive Heat Warning in effect for the Tri-State area.

“An Excessive Heat Warning is issued when the combination of heat and humidity is expected to make it feel like it is 105 degrees or greater,” officials from NWS said in a statement. “Take extra precautions if you work or spend time outside.”

The New York City Emergency Management Department and the Department of Health and Mental Hygiene encourages New Yorkers to beat the heat by knowing the hazards they may face, having a plan and staying informed.

“Extreme heat is dangerous, especially for vulnerable New Yorkers,” said Emergency Management Commissioner Joseph Esposito. “The best way to beat the heat is to use air conditioning or get to a cool place. Remember to check in on at-risk family, friends, neighbors, senior citizens and those with chronic health conditions.”

Health Commissioner Dr. Mary T. Bassett said that as temperatures go up, the risk for seniors climbs as well. She recommends that older New Yorkers use their air conditioners or go to the city’s many cooling centers.

The city’s public pools and beaches are go-to spots when the city bakes. During the heat wave, the Parks Department extended outdoor pool general swim hours to 8 p.m.

However, those who aren’t in close proximity to a public pool often turn to the timed-honored tradition of turning on their corner fire hydrant. Fire Commissioner Daniel A. Nigro says that’s fine, but to do it responsibly.

“On hot summer days, it’s tempting to open a fire hydrant for heat relief, but this can negatively impact water pressure which is critical for fire operations, hindering the efforts of firefighters, endangering the lives of New Yorkers and first responders,” he said. “Visit your local firehouse to request a spray cap to be installed on your local hydrant.”

What’s the best way to stay cool and safe during a heat wave? The city’s top recommendations are to stay out of the sun and avoid extreme temperature changes, wear lightweight, light-colored clothing and drink fluids, particularly water, even if you don’t feel thirsty.