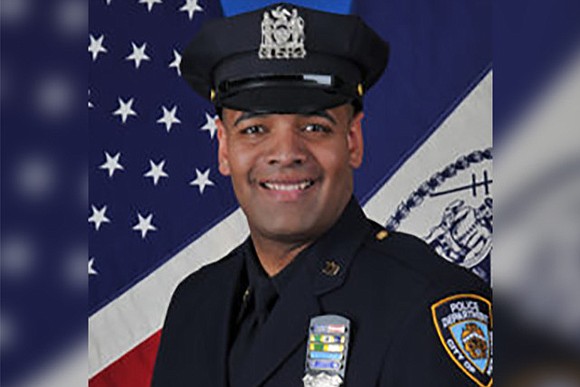 A cop was shot in Brooklyn.

It was like a scene from a movie. Just after 6:40 a.m., Friday, July 6, a gray rainy day, two helicopters overhead alerted sleepy or just awoke residents of Bed-Stuy, Brooklyn that something was going on. Police cars with sirens blaring tore up Fulton Street. Yellow caution tape and uniformed cops cordoned off Fulton Street, Decatur Street and Kingston Avenue as cops marched in columns to the scene of a shooting. They searched for the on-foot shooter. A trail of blood from the injured man led them from the area of the original gunfire exchange, to the place he ran to a few blocks up.

Dozens of residents stood in the spitting rain, some pleading with sergeants and detectives that they lived in the frozen zone and needed to get home. Those who convinced the NYPD officers were then given a personal escort.

Public transportation was rerouted and news teams flooded the area.

At a news conference at Kings County Hospital, Police Commissioner James O’Neill was flanked by top police brass and medical officials, including Brooklyn District Attorney Eric Gonzalez, Chief Jeffrey Maddrey and Dr. Budarakis of Kings County Hospital. O’Neill said that at approximately 6:40 a.m. that morning, Brooklyn North Warrants Squad officers in an unmarked vehicle were driving down Fulton Street when they “recognized a man ... wanted for a domestic violence robbery involving a firearm.” Initially the cops chased him in the car. They got out of their vehicle and chased him on foot.

According to the commissioner, the man brandished a gun and “shot at the officers, striking a detective once in the leg.”

“The detective returned fire, as did two other officers, and the suspect ran away,” O’Neill continued. After a search of the immediate area, responding officers located and apprehended the suspect inside a hallway at 39 Kingston Ave. A firearm was recovered nearby [in a garbage can].”

The injured detective is Miguel Soto, 32. Apparently the bullet went straight through his upper thigh. The alleged shooter has been identified as Kelvin Stichel, 33. He is expected to survive the gunshot wound to his forearm and was charged with attempted murder.

Council Member Robert Cornegy said, “While I was saddened to hear the news of Detective Soto’s shooting injury Friday, I am extremely grateful the NYPD was able to apprehend the suspect, and there was no further injury or loss of life that came out of this dangerous situation.”

Within one day of the anniversary of the killing of Detective Miosotis Familia in the Bronx, officers rejoiced as Soto left the hospital in a wheelchair surrounded by his family. Stichel remained unconscious and handcuffed to a hospital bed.