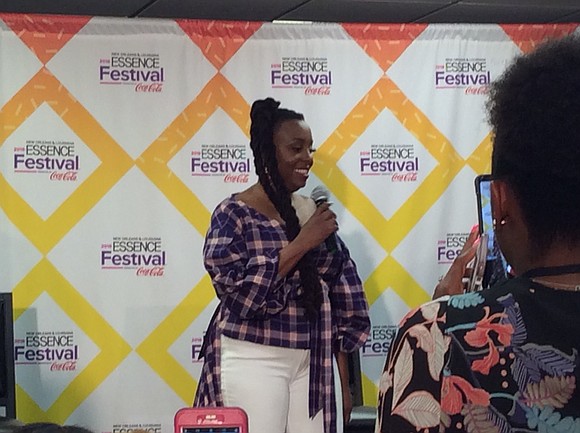 New Orleans, La.—According to local news reports, the Essence Music Festival attracted 510,000 patrons to New Orleans for their annual mix of concerts, empowerment sessions, celebrity appearances and film screenings this past weekend, July 5 through the July 8. All three nights were sold out—another record set—including Friday night’s concert at the Superdome starring Snoop Dogg and Miguel. An attractive new addition was a medley of gospel artist performances alongside Snoop Dogg, curated by The Roots, that featured John P. Kee, the Clark Sisters, Fred Hammond and Kirk Franklin. Jill Scott and Erykah Badu also joined the band onstage singing “You Got Me,” alternately together, and then their own hits, including “Slowly, Surely,” “It’s Love” and “On and On.” Snoop Dogg delivered the coolest electrifying set with a robust flow of rap songs with bursts of colors and rolling skylights projected behind him and in front of the mainstage.

Another mashup Saturday was the “Ladies First” unit of female rappers, who received loud applause from the audience. Queen Latifah opened with a selection of jazz-infused songs, including “The Poetry Man” in a tribute to her late mother. Next, she turned up the volume with the lineup featuring Brandi, MC Lyte, Missy Elliot, Yo-Yo, Remy Ma, Salt ‘n Pepa and Monie Love. This hip-hop fest displayed powerful rhythms and positive rap hits from the 1980s through the 1990s, including Latifah’s “Unity” and Salt n’ Pepa’s iconic classic, “What a Man.”

The Sunday night alliance starred the “King of New Jack Swing,” Teddy Riley, who appeared center stage dramatically cloaked in a long black robe. The crowd grew wild as his lineup, starring Guy and Blackstreet, served up a medley of their hits, along with Ginuwine in a cover of Michael Jackson’s “Remember the Time.” Doug E. Fresh set the Dome on fire with “The Show” and his inimitable display of his beat box vocal rhythms.

Highlights of the solo performances were returning stars, Jill Scott, Erykah Badu (despite her bad taste in costume), Mary J. Blige, Fresh, Salt ‘n Pepa and Riley, who led several fast-paced stylized hip-hop dance numbers. Lip-syncing became noticeable to concertgoers in Janet Jackson’s performances. On a positive note, Janet and her dancers showed out with eclectic and sophisticated intricate choreography in hip-hop and modern dance styles. She also remembered her father, who passed just weeks ago and who, in her words, would have advised her to “finish what you started”—to perform at the Essence Festival and in her current tour.

At the Convention Center, there were stages that featured interviews with visiting actors from the television series “Power,” “Queen Sugar” and “Insecure.” Many sponsors, AT&T, State Farm, McDonald’s, Wal-Mart and Ford, held special promotions, contests and even a $10,000 college scholarship award in which festivalgoers participated. The cast of “The Bobby Brown Story” appeared to field questions about this upcoming biopic on the BET network to air Sept. 4 and Sept. 5. Brown noted that the movie is simply about “the truth” of his life.

Beauty and style, entrepreneurship opportunities, books and the empowerment series were the talk of the weekend. In addition, child author, Morgan E. Taylor, with her father, G. Todd Taylor, discussed their book “Daddy, Will I Be a Princess?” with the press, and popular vocalist Ledisi announced her tome coming in September titled “The Walk.” Young actor Myles Brown from “Blackish” fielded questions about his “nerve-wracking” auditions for different television series before he landed his current role on the acclaimed series. At 13 years of age, he also serves as a mentor with the Disney Dreamers Academy for youth aged 13 to 18.

Another innovation for the Essence Music Festival and the City of New Orleans is its first woman elected mayor of the Crescent City. Latoya Cantrell is also the first African-American woman to serve this vibrant historic metropolis. Moreover, Essence magazine is under new ownership. Time Warner sold Essence Publications to a Black entrepreneur, Richelieu Dennis, in January. This year there were additional sites for the E-Suite events on business startups and branding and for the McDonald’s 365Black Awards.

Next year marks the 25th anniversary of the largest African-American event in the country and this fest seems to know no bounds as it extends further in its reach to support and to celebrate Black women, family and community.