Protect families march and rally: Trump’s executive order is not the end 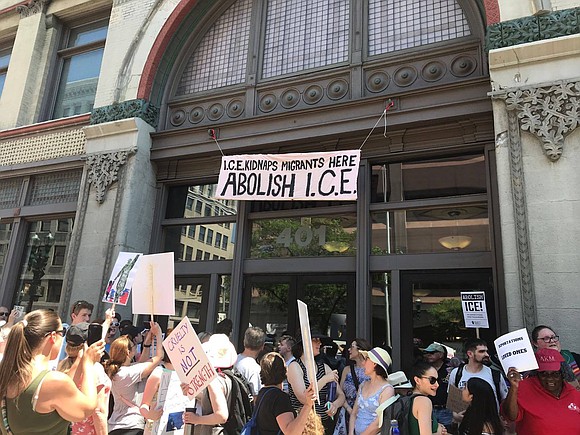 Saturday, June 30, 2018, more than 20,000 people marched across the Brooklyn Bridge in protest against the recent policies made by the Trump administration toward immigrants. According to Anu Joshi, the director of policy at the New York Immigration Coalition, the event Saturday was organized in eight days with the co-sponsorship of 130 organizations, including immigrant rights advocates, advocacy groups, unions and allies.

June 20, Trump signed an executive order in an attempt to quell the outrage caused by the separation of immigrant children from their parents. According to the president and his top administrative officials, court rulings or laws are leaving them no choice but to separate families attempting to enter the United States at the southern border. However, immigrant families are primarily being separated because of the enforcement of the Trump administration’s “zero-tolerance” policy started in April. Because the Department of Justice cannot prosecute children along with their parents, the zero-tolerance policy has led to an increase in the number of family separations. According to the U.S. Department of Justice, approximately 2,000 children were split up from their parents during the course of six weeks from April to May. The Trump administration implemented the zero-tolerance policy by choice; therefore, no law or court ruling mandates that course.

Since 2014, thousands of children and families have fled El Salvador, Guatemala and Honduras because of gang activity and widespread violence. Central America’s Northern Triangle was so dangerous that, according to the U.N., Honduras had the world’s highest murder rate in 2014. The rates in El Salvador and Guatemala were not far behind. Amid the Central American refugee crisis, the Obama administration sought to prioritize deportation of gang members, those who posed a threat to national security and those who had committed felonies. Undocumented immigrant families who were seeking asylum were often released after being screened by the U.S. Customs and Border Protection agency and sent to the civil court system. However, since the implementation of the Trump administration’s zero-tolerance policy, the Department of Homeland Security considers any adult who is “believed to have committed any crime, including illegal entry,” to be subject to persecution by the Department of Justice. Therefore, undocumented immigrant parents are detained and sent to the criminal courts, and their children are transferred to the custody of the Office of Refugee Settlement in the Department of Health and Human Services, as if they are unaccompanied minors.

Jennifer Jones Austin, president and CEO of the Federation of Protestant Welfare Agencies, believes that undocumented immigrants should not be criminalized for first-time entry into the country, which is considered to be a misdemeanor. Additionally, Austin believes that an underestimated issue regarding children being separated from their parents is trauma. She empathizes with the trauma experienced by

Austin noted that on the day of the 9/11 attacks, although she had no idea what was going on at the time, she and her 3-year-old child were taken to the hospital, where they were separated from each other. The effects of that separation are with them to this day.

According to The Washington Post, nearly 7,700 medical-health professionals and 142 organizations signed a petition urging the Trump administration to end the zero-tolerance policy because of the long-term psychological damage experienced by children forcibly separated from their parents, including posttraumatic stress disorder.

Estela Vasquez, executive vice president of 1199SEIU, herself an immigrant, stated, “My heart hurts when I think about the babies ripped from their parent’s arms at our border, the families separated by oceans because of the Islamophobic Muslim ban. Are we returning to the days of slavery and Japanese internment camps?”

To fight against the zero-tolerance policy, Anu Joshi, director of policy, New York Immigration Coalition, believes “we need to be engaged as much as we can.” She encourages people to engage in their communities, donate to noble causes and vote.

Last month, nearly 240 children separated from their parents were receiving care at the Cayuga Center in East Harlem. “Congress needs to reflect who we are,” Joshi said.