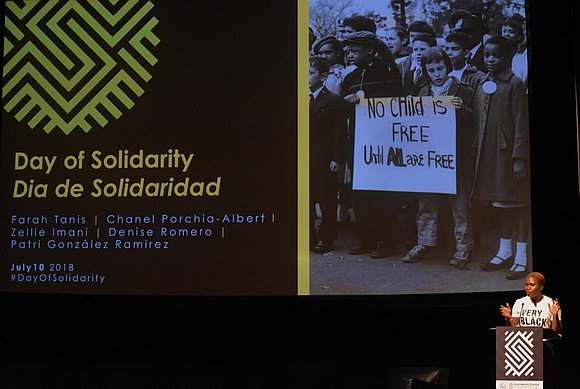 The Langston Hughes Lobby of the Schomburg Center for Research in Black Culture was filled with activity on the evening of July 10. Community groups, public representatives and activist organizations had gathered there for the Center’s Day of Solidarity on Racism, Immigration and Family Separation.

The event began at 4 p.m. with a resource fair in the Langston Hughes Lobby, where groups offered expert information, services and private counsel to attendees. The Center also conducted a letter-writing campaign urging against the Trump administration’s family separation and indefinite detention policies.

Community groups in attendance spanned pertinent issues, reflecting the event coordinator’s desire for an expansive and intersectional dialogue for attendees. Black Woman’s Blueprint, a Brooklyn-based grassroots group devoted to ending sexual violence in Black communities, was present in solidarity. The group offered resources to survivors of sexual violence and promoted further dialogue on issues of sexual violence specific to immigrant and undocumented families.

“We are so happy to be here, providing people with affirming resources,” said Joanna Alvarez, a program manager and member supporter with the group who had previously worked with the Schomburg Center on the group’s Mother Tongue Monologue series.

Other organizations highlighted the culture and heroism of the communities they served. The Museum of Impact, a mobile organization that constructs exhibits and installations across the country, promoted its upcoming projects. The group seeks to “combine the arts and activism” to help educate the public about pressing issues today and the efforts to address them.

“We don’t need to look to the past for amazing achievements,” said Monica Montgomery, the founder of the Museum of Impact. “There’s a lot of great activism happening in our communities today and we want to celebrate that.” The Museum has thus far conducted more than 40 installations, including several in Harlem around the Schomburg Center.

Some groups, such as the Black Alliance for Just Immigration, sought to expand the conversation about immigration to include the Black immigrant experience. Much of the group’s work in New York seeks to provide resources to Black immigrant communities and bridge divides between recent immigrant and more established communities.

“People often erase Black people from the immigration debate,” said Albert Saint Jean, an organizer from BAJI. “But especially in New York City, a place where 50 percent of the Black population are first or second-generation immigrants, the issue is not as cut and dry.”

The Mayor’s Office of Immigrant Affairs was also in attendance to promote the city’s resources for both documented and undocumented immigrants, including the New York City Identification Card. The city hopes that its municipal identification system will serve as a less “stigmatized” resource compared with other government ID systems, according to officials present.

The Neighborhood Defender Service of Harlem similarly sought to end misperceptions around resources and aid available to endangered and marginalized families. NDS Harlem attorneys handed out pamphlets and fliers in both Spanish and English, enumerating the many rights that community members had under the law in interactions with law enforcement and in the legal system.

The event then transitioned to a panel and community forum on issues of family separation and discrimination in the city today. The panel, which centered around issues pertinent to Black, immigrant, undocumented and other marginalized identities, was moderated by the Schomburg Center’s education coordinator, Kadiatou Tubman.

“We wanted to coordinate an event that brought these voices together,” said program assistant Catherine Feliz. “It’s been a big effort, but the team here [at the Schomburg] is really happy to finally come together.”