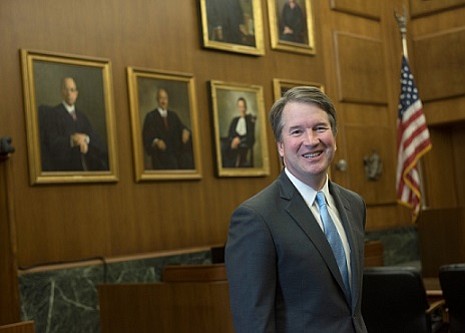 Judge Brett Kavanaugh, 53, was nominated to the U.S. Supreme Court Monday. With affirmative action, voting rights, abortion rights, immigration, the Affordable Care Act and a federal investigation in balance, Kavanaugh, if confirmed, would give conservatives a legal stronghold for decades. The fight over this nomination began only moments after the announcement.

Conservatives “have been pushing back [against liberalism] for 30 years, and obviously, the announcement tonight is a big step in the right direction,” said Curt Levey, the president of the Committee for Justice, a conservative activist group. A graduate of Yale Law School, Kavanaugh is the only child of two judges. He is currently on the Washington D.C. Circuit Court. Kavanaugh was nominated to fill the seat of retiring Associate Justice Anthony Kennedy, 81. Brett Kavanaugh was a law clerk under Justice Kennedy, who was nominated by President Ronald Reagan.

Lifelong tenure is meant protect them from political pressures from presidents or the public. However, Donald Trump had said that he would only appoint justices who will overturn Roe v. Wade. “I am pro-life,” he said. The legality or illegality of abortion would “go back to the individual states” to decide. Roe v. Wade is the 1973 Supreme Court decision making abortions legal, nationwide. Before Roe v. Wade, each state decided if abortion was legal. Recently, Kavanaugh ruled against a 17-year-old rape victim who became pregnant and wanted an abortion. Kavanaugh, who is Catholic, and has two daughters, does not believe in abortion. Judges, especially those seeking the high Court, will be questioned by the Senate Judiciary Committee about their past legal rulings and ability to be neutral interpreters of the law.


Senate Majority Leader Mitch McConnell called Kavanaugh a “superb choice” while Senate Minority Leader Charles Schumer vowed to fight this nomination “with everything I have.” All presidents must seek the “Advice and Consent” of the Senate regarding the appointment of federal judges. Currently, Republicans control the Senate by one vote, 50-49 because Sen. John McCain is hospitalized. Only senators present in the Senate chamber can vote. Senators Margaret Collins of Maine and Lisa Murkowski of Alaska, both Republicans, have expressed reservations about voting for any nominee who would overturn Roe v. Wade. Last year, a Republican-controlled Senate blocked the confirmation of Merrick Garland, who was President Barack Obama’s nominee to high Court. However, Collins and Murkowski voted with their party and confirmed the nomination of Neil Gorsuch last year.

Kavanaugh worked under Kenneth Starr during the investigation of President Bill Clinton and assisted in the impeachment proceedings. Kavanaugh was a staff secretary to President George W. Bush during the Bush v. Gore case and later joined the Bush administration. The New York Times reported that Kavanugh’s “decisions have been applauded by conservatives” especially on the topics of gun rights, campaign finance and religious freedom. Conservatives have used religious freedom to challenge the Affordable Care Act and same-sex marriage. Religious freedom was the successful argument made by a Colorado baker who refused to make a cake for a gay couple. Religious freedom was also a successful legal argument for conservatives in cases challenging access to contraceptives under the Affordable Care Act.

Democrats want to slow down the confirmation process until after the midterm elections in November, hoping to capture control of the Senate. McConnell has said that he is pushing to hold confirmation hearings in the early fall. Millions will be spent by advocates for and against Kavanaugh’s nomination. The battle over this nomination may end over one single vote in the Senate. The Supreme Court’s term begins in October.

Gloria J. Browne-Marshall is a legal correspondent, author of “The Voting Rights War” and a professor of constitutional law at John Jay College (CUNY). She is working on her first novel.