TRUMP’S CHOICE: A justice to deny 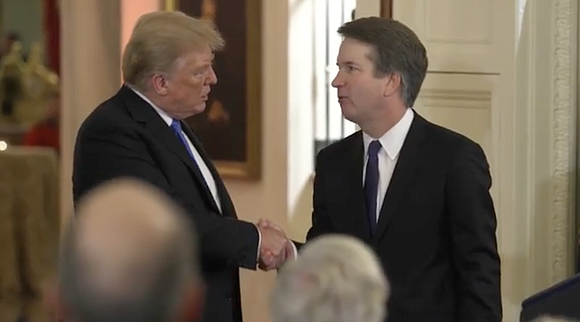 At least several minutes before Trump marched to the podium on the East Wing of the White House, the world knew that Judge Brett Kavanaugh would be his nominee to replace Justice Anthony Kennedy, who will be leaving the bench at the end of the month.

In fact, for weeks Kavanaugh was rumored to be a front-runner, though he was a last minute inclusion on a list of candidates preapproved by the Federalist Society and the Heritage Foundation, two conservative groups that have been pushing for a right wing Supreme Court for years.

The groups got their wish and so did Trump, but what looms before them is a contentious confirmation process that may be as long as the documents and cases compiled by the nominee.

After delivering a bushel of accolades on Kavanaugh, 53, and straight from the D.C. Circuit Court of Appeals, noting that he possessed one of the “sharpest and finest” legal minds of his time, Trump brought him to the podium where he was greeted by an extended standing ovation.

Kavanaugh thanked and praised Trump for the nomination and then recounted his background, suggesting there was only “one judge” in the family, his mother who was not only a jurist but a teacher. He commented, “In the 1960s and ’70s, she taught history at two largely African-American public high schools in Washington, D.C.,” as if those facts would help persuade detractors in the Black community. They did not, and the NAACP came out firing against a nominee who had written that a president is beyond indictment.

“Brett Kavanaugh is a dangerous ideologue whose extreme views on civil rights would solidify a far right majority on the Supreme Court,” the NAACP declared in a statement to the press. “Coming after Neil Gorsuch’s appointment, a Kavanaugh confirmation would re-make the Court in President Trump’s own image. This prospect is unacceptable to the American people, and the NAACP is ready to lead the fight of a generation.”

The civil rights organization pointed out that it had opposed Kavanaugh’s appointment to the D.C. court, and promised to resume that fight to deny him a seat on the Supreme Court. “With a Justice Kavanaugh on the Supreme Court, we could see reversals of hard-won gains securing equal opportunity in education, employment and housing,” the statement continued. “We could see further exclusion of communities of color from participation in our democracy. We could see racism continue to flourish within the criminal justice system. We could see the elimination of effective tools for proving discrimination. We could see the overturning of Roe v. Wade and the guarantee to accessible health care for millions.”

The Rev. Al Sharpton, president of National Action Network said, “If there’s one thing this year’s Supreme Court term has shown us, it’s the difference just one justice can make in the progress of our nation. President Trump’s pick of Brett Kavanaugh to replace Anthony Kennedy ensures the Supreme Court will be able to further Trump’s destructive agenda for decades to come.

“Some will pass this off as a middle of the road pick. Don’t be fooled. On every issue, Kavanaugh has proven to be an ideologue who will ignore our rights—working to take away a woman’s right to choose, challenging the constitutionality of the Affordable Care Act that has benefited millions of Americans, and ruling against workers and consumers at every turn. This is a fight for the soul of our country, and we at National Action Network call on the Senate to stop Kavanaugh’s nomination at any cost—his confirmation would be a disastrous attack on basic human rights.”

Sen. Cory Booker of New Jersey, and a Democrat on the Senate Judiciary Committee, was equally troubled by the nomination, charging that Trump had done nothing more than find the “most self-serving person he could choose…if he’s indicted.” He said “we cannot let this confirmation process go forward.”

One of the obstacles removed from this process was the filibuster that allowed Neil Gorsuch to make it to the nation’s highest bench. That appointment was facilitated by three Democrats who sided with the GOP senators.

Two Republican senators who may withhold their votes are Lisa Murkowski of Alaska and Susan Collins of Maine, although their initial responses are not that clear on where they stand. “Judge Kavanaugh has impressive credential and extensive experience, having served more than a decade on the D.C. Circuit of Appeals,” Collins said in a statement. “I will conduct a careful, thorough vetting of the president’s nominee…as I have done with the five previous Supreme Court justices whom I have considered.”

Murkowski said that she had not met the nominee, but she looked forward to that occasion, and promised to review his decisions and writings from the bench, “and pay careful attention to his responses to questions posed by my colleagues on the Senate Judiciary Committee.”

Assemblymember Michael Blake of the Bronx voiced his opposition in an email, noting, “With so many issues at stake, from Roe v. Wade to universal health care, from immigration to voting rights, from affirmative action to marriage equality, it is paramount that the process is not rushed with such an important selection in our modern history. I strongly believe that with the continual investigations surrounding the Trump administration along with the pending midterm elections, the U.S. Senate should do everything possible to delay a vote until we know the results of both of the investigations and who we elect into the next Congress.”