Report: NYPD to open its own investigation into the police killing of Eric Garner 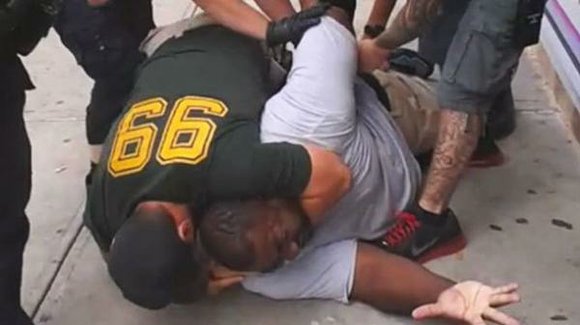 The NYPD plans to open its own investigation into the 2014 police killing of Eric Garner, according to reports.

Since the Department of Justice (DOJ) hasn't made any announcements for criminal charges against the NYPD officer who killed Garner, Daniel Pantaleo, NYPD lawyer Lawrence Byrne said in letter that the police department will conduct disciplinary proceedings by August 31.

"It has become clear that a definite date by which time a final decision by the (Justice Department) will be rendered in this matter cannot be predicted," Byrne said.

Garner was killed by NYPD officers in 2014 on Staten Island during an arrest for allegedly selling untaxed cigarettes. Pantaleo put him in what appeared to be a prohibited chokehold, killing him. The incident was caught on cellphone video, on which Garner can be heard saying, “I can’t breathe.”

On Monday, Garner's mother, Gwen Carr and Rev. Al Sharpton said they plan to be at the hearings for Pantaleo. Tuesday marks four years since Garner was killed.

"We just want to see justice for my son and we want to see this done," said Carr. "We don't want politics to play into this we want justice. I have sleepless nights and I still have nightmares. I am going to continue to fight and I want everybody to know that I'm in this fight for the long run.

Sharpton added that he met with Mayor Bill de Blasio on Monday and explained to him that the family has been waiting for years for some form of justice. Sharpton wants to see all of the officers involved in Garner's killing fired.

"All the family is asking for is a fair trial," Sharpton said. "We intend to make sure justice is served."

distraction from the fact that no one has been held accountable in Garner's death for the last four years.

"Multiple officers used excessive force while Pantaleo used a chokehold banned by the NYPD for over 20 years, others did nothing to intervene as Garner said he couldn't breathe 11 times," said spokesperson Carolyn Martinez-Class. "No one has been held accountable for any of this misconduct and the letter leaked by the NYPD equates to more rhetoric and not action towards accountability."

In response to the announcement of the NYPD investigation, Police Benevolent Association President Pat Lynch said in a statement that the DOJ should move forward with the case against Pantaleo but the NYPD should not rush to a decision during the discipline process.

"Police Officer Pantaleo is entitled to due process and an impartial consideration of the facts. If that is allowed to occur, we are confident that he will be vindicated and will finally be able to move forward," Lynch said.