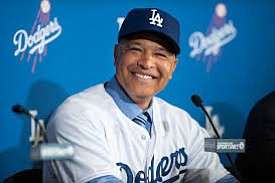 The Los Angeles Dodgers' Dave Roberts is the only African-American manager in Major League Baseball. Contributed

For more than 70 years, this publication has written about and advocated for the integration of Major League Baseball, and in more modern times for the racial diversification of MLB, most ardently a respectable inclusion of African-Americans as managers and executives.

As the end of this decade rapidly approaches, and 71 years after Jackie Robinson broke MLB’s color barrier, African-Americans are a distinct minority on the field, in the dugout as managers and in front offices across the league’s 30 teams. This season, only 8.4 percent of players on opening day active MLB rosters were Black players from the United States and Canada.

The percentage of Black players is much higher if Afro-Latinos as well as Black players from countries such as Curacao are included. Applying those demographics, 42.5 percent off all players as of opening day were men of color, an all-time high. The 8.4 percent African-American representation is an increase from last season’s dismal 7.7 percent but substantially lower than the high of 19 percent in 1986.

It is a trend that can be seen at youth levels, high school and college. Those who follow sports at historically Black colleges and universities are well aware of the high number of white and Latino student-athletes on the baseball rosters at the schools.

As for managers in MLB, the Los Angeles Dodgers’ Dave Roberts is the lone African-American. And only four managers are men of color. In April, The Institute for Diversity and Ethics in Sport, headed by Dr. Richard Lapchick, released its 2018 Major League Baseball Racial and Gender Report Card.

Initiatives such as the Reviving Baseball in Inner Cities program, founded by former MLB scout John Young in Los Angeles in 1989; the Major League Baseball Diversity Fellowship Program, launched last year; the Diversity Pipeline Program; and the Selig Rule, instituted by then MLB commissioner Bud Selig in 1999 directing franchises to consider minorities when seeking to fill openings for managerial and front office positions, have sought to address increases in the number of African-Americans, as well as women and other minorities, on many levels of the sport.

Williams is the executive vice president of baseball operations for the Chicago White Sox, the team’s top baseball operations official. He was their general manager from 2000 to 2012. Progress is often slow and methodical, but in baseball, particularly among MLBs 30 teams, it is moving at an unsatisfactory snail’s pace for African-Americans.