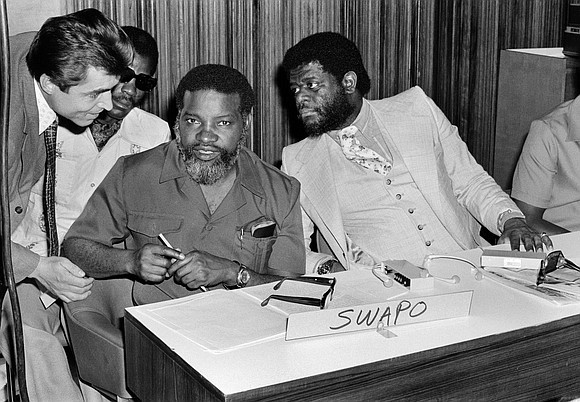 Dr. Theo Ben Gurirab, Namibia’s first foreign minister and second prime minister who was, according to Namibia’s President Hage Geingob, “a comrade and giant of the Namibian struggle for liberation,” died Saturday, July 14, 2018, after a long illness at the age of 80, at a Windhoek hospital in Namibia.

The December 12th Movement, the Patrice Lumumba Coalition and the Elombe Brath Foundation will host a Memorial Celebration of the Life and Legacy of Dr. Theo Ben Gurirab, Friday, July 20, 2018, at 6 p.m. at the National Black Theatre, 2031 Fifth Ave. (corner of 125 Street), New York, N.Y.

“Without the country’s first foreign minister, and one of the leading architects of Namibia’s diplomacy, a rich chapter is closing,” President Hage Geingob said in a press statement.

Gurirab’s international work as part of Namibia’s SWAPO leadership—prime minister, foreign minister, Organization of African Unity Council of Ministers, president of the United Nations General Assembly and president of the Inter-Parliamentary Union—garnered him the respect of world leaders.

Gurirab’s steadfast leadership and Pan-African worldview has contributed significantly to the liberation struggles of African people on the continent and throughout the Diaspora. He was a true freedom fighter.