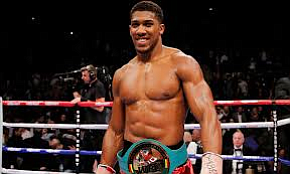 Anthony Joshua continues to delay fighting Deontay Wilder. The unanswered question is why the 28-year-old Joshua, (21-0, 20 knockouts) the IBF, WBO and WBA (Super) heavyweight titleholder, will not cement a deal to fight the 32-year-old Wilder (40-0, 39 knockouts), who has held the WBA belt since 2015.

On the surface, it doesn’t appear Joshua has any fear or apprehension about his ability to defeat Wilder. Conversely, Wilder is supremely confident he’ll hang the first loss on Joshua of his professional career when they ultimately meet.

Despite Wilder, a native of Birmingham, Ala., making many significant concessions, including agreeing to fight Joshua on his home soil in Great Britain and to forego a percentage of the fight’s revenue for a guaranteed $15 million payment, Joshua instead inked a deal to defend his belts against mandatory challenger Alexander Povetkin, a tough 38-year-old from Russia with an impressive 35-1 record, at Wembley Stadium in London September 22. In boxing, mandatory is as solid as a wet tissue. Joshua could have chosen to make a fight with Wilder virtually all boxing fans are clamoring to see.

A Joshua-Wilder matchup is arguably the most anticipated heavyweight fight since the Lennox Lewis-Mike Tyson pairing in June 2002, which resulted in an unfulfilling eighth-round knockout by Lewis. It will be a legitimate global mega-bout between two highly marketable figures possessing superior athleticism. Both look the part of champions. Joshua is a chiseled 6-foot-6, 250 pounds with excellent movement and punching power. Wilder, a former high school football and basketball player, stands 6-foot-7 with thunderous hands and maintains an explosive fighting weight of approximately 230 pounds.

A loss to Povetkin by Joshua would reduce much of the aura and hype surrounding an imminent fight with Wilder. So why is he taking such an immense risk? Perhaps Joshua and his promoter, Ed Hearn of Matchroom Boxing, are strategically considering Hearn’s new eight-year, $1 billion deal with DAZN (pronounced Da Zone), an all-sports streaming service founded in London in 2015.

At a news conference in New York Tuesday attended by Joshua and Povetkin, Hearn announced that DAZN would be the platform for their upcoming fight. It will almost certainly stream the inevitable Joshua-Wilder encounter, which will assuredly increase DAZN’s subscriptions at a price point currently set at $9.99 per month. The service will be available in the United States Sept. 10.

Joshua-Wilder could have a date of April 13 at Wembley, when Joshua will have the second of his two-fight agreement with the venue. Until then, or perhaps beyond, the two best and by far most appealing heavyweights in the world will continue to play the fight game’s familiar and exasperating version of cat and mouse.