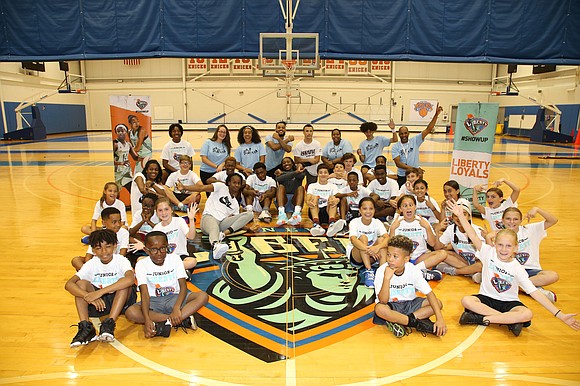 When former New York Liberty player Swin Cash retired from playing and became the team’s director of franchise development, she was committed to not only increasing the Liberty’s already strong community outreach but also to aligning players with causes meaningful to them. Last year, the Liberty hosted its first-ever Unity Game.

“After last year and having our vision come to life, we got a great response from our fans,” said Cash, who in 2016 was one of the leading voices on the Liberty around Black Lives Matter. “The feedback from the players was instrumental in how we planned out Unity Weekend for this year. We wanted to make sure we were able to deliver on the promises that our players made to our fans.”

Last Friday evening, there was an interactive workshop at the YWCA of White Plains & Central Westchester. The YWCA does a lot of work with women’s empowerment and engagement in the community. Topics included social justice and how women can be more engaged in issues that matter to them. The event was open to fans.

Saturday, there was a youth basketball clinic. Before Sunday’s game against the Chicago Sky, there was a pregame unity panel discussion at the Westchester County Center that featured former NBA player, activist and author Etan Thomas and Columbia University professor of Race and Racism Zerandrian Morris. There was also a special meeting for the players after practice Saturday, where they were able to discuss social justice issues and how they can be more engaged.

“I felt it was very important for our players to continue to have not only a voice, but a platform,” said Cash. “I know how difficult it is while you’re playing to want to be an advocate. By listening to them and taking the things that they wanted and communicating that to our organization, we’re able to create some really cool programs and opportunities for our fans to understand why these things are so important for our players.”

She added, “The players want to encourage our fans. We have these issues that directly affect our community. We want to make sure that fans are educated in this space and trying to make a change… We want to go from protest to progress.”