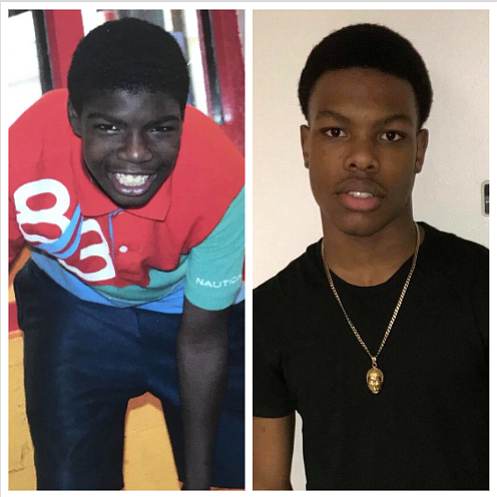 Monday evening, a heavy-hearted Brooklyn community decried the senseless violence that claimed the lives of two 16-year-olds just days apart. A crowd marched from Brooklyn Law and Technical High School, where one of the teens aspired to begin his senior year this fall, to the site where his life ended in East New York, while urging local youths to stop killing one another.

“Love yourself, stop the violence!” they chanted while marching from where 16-year-old Justin Richey was killed.

Latrell Brown was killed in Bed-Stuy near the Macon Street and Lewis Avenue intersection July 11 at approximately 2 p.m., allegedly by Justin Delapara,17. Then four days later, Richey was shot near the Blake Avenue and Pine Street intersection in East New York, around 5:10 p.m. after an altercation with three males at a nearby bodega.

“We just got to come together as a community,” Richey’s friend Tyana Hale tearfully urged.

“When he wasn't there,” she added, “he was at the rec center, or on the basketball court with one of his coaches.”

Armstrong and Richey’s aunt clutched each other and prayed together Monday.

“Saturday, No Kids Left Behind, we were with him and he was just smiling,” Bishop David Maldonado of the 75th Precinct Clergy Council said Monday. “To hear, 24 hours later, over violence, his life was taken away. All I have to say is, ‘Let’s stop the violence.’”

Witnesses say Richey was arguing with three males, who started beating him before one retrieved a gun and shot him in the abdomen, back, chest and ribs. They ran to the nearby Cypress Hills Houses. Richey ran about half a block before collapsing. He was taken to Brookdale Hospital and pronounced dead shortly thereafter.

“When we see each other, he’d talk, tell us how he’s trying to make it out of the ‘hood and trying to survive,” said a friend who requested anonymity.

“He was a good, good kid,” said a friend who declined to give his name. “16-years-old for one day. He didn’t deserve this.”

Police said Richey was not gang affiliated, no arrests have been made and the investigation is on-going.

Reports say Brown was shot on his way to basketball practice while walking with his girlfriend, after exchanging words with a stranger.

“Me and Latrell were walking, and this guy was making a face,” said girlfriend Sabrina Tucker, 17, adding that he didn’t recognize the shooter. “Latrell asks the guy if he has a problem. He turns around and shoots him. I ran to him. I took my shirt and covered his head. I told him I needed him and loved him.”

Armstrong added, “How you gonna take somebody's life like that? What are you doing carrying a gun?”

Delapara was charged with murder and weapons possession, and is scheduled to return to court July 17.