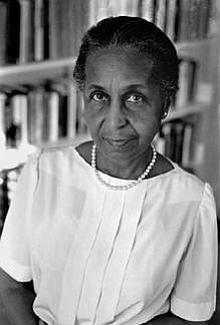 A recent visit to the National Museum of African-American History and Culture was made all the more stunning with the discovery of a quote from famed musicologist and historian Dr. Eileen Southern. “The enduring feature of Black music is neither protest nor self-expression; it is communication, and one cannot imagine a time when Black musicians will have nothing to say, either to others or to God,” is Southern’s quote that appears in the museum’s official guide.

That is just a sample of her expansive insight on the evolution of Black music, much of which she dispensed in lectures, classrooms, articles, interviews and books, none more popular than her seminal “The Music of Black Americans” (1971).

Born Eileen Jackson in Minneapolis, Minn., Feb. 19, 1920, she spent her formative years in Minneapolis, Chicago and Sioux Falls, S.D. She was the eldest of three children and raised alternately by divorced parents. No matter the location or parent, the piano lessons were consistent, and at age 7 she performed her first concert. Music was such a part of the household—her father was a competent violinist and her sisters sang—that she thought all families were similarly involved.

She earned her bachelor’s and master’s degrees from the University of Chicago in 1940 and 1941, respectively, keeping to the study of classical music as her mother insisted, although she often delved into the blues and jazz. With her degrees in hand, she accepted a teaching position at Prairie View Agricultural and Mechanical College in Texas. It was there she met Joseph Southern and they married immediately. Along with her maternal duties—the couple had a daughter Myra and adopted Edward—Southern acquired additional training at Boston University and Juilliard, all of which enhanced the numerous concert engagements across the country.

In 1951, she attended New York University to work on her doctorate, focusing on Renaissance music. It wasn’t long before she was a tenured professor at York College in Queens. When students at Brooklyn College began demanding Black Studies, a music curriculum was developed and Southern’s expertise was invaluable. This commitment and activity were instrumental in pushing her deeper into the study of the music and the desire for a more extensive discussion of it. “The Music of Black Americans” was the result and it gave her increased renown and a sense of fulfillment.

“It has given me a real feeling of accomplishment,” she said of the book. “I always had the feeling that I was not really making a contribution to the history of my people. Now I feel that I have done something worthwhile. It’s really the one thing I have ever done that I have not felt frustrated about.”

Other publications followed as she ventured on to Harvard University by 1976 and she assumed a joint professorship in Afro-American Studies and the music department, eventually becoming the first African-American woman to be tenured at Harvard. By this time, she and her husband had already founded the journal The Black Perspective in Music, the first publication of its kind. Concurrent with this endeavor she published her fourth book the “Biographical Dictionary of Afro-American and African Musicians” (Greenwood Press, 1982).