What Curl Fest 2018 says about the Black dollar 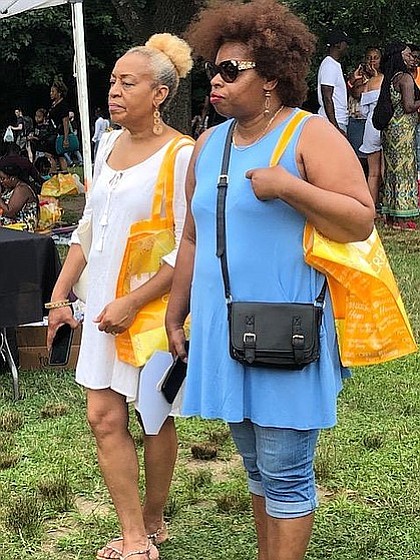 Gravity-defying afros, waist-length protective styles of braids, twists and perfectly spiral coils adorn the heads of women in shades of brown. They are in formation, one behind the other, to enter a ticketed event in Brooklyn’s Prospect Park. As they stand in line, one hears the occasional “yes hair,” and other forms of praise among Black women. Much like afternoons in a beauty shop, they are joined together by a special aspect of Black womanhood.

Saturday, July 21, the Curly Girl Collective hosted their fifth anniversary of Curl Fest. Their mission statement encompasses their brand. It is, “to create innovative experiences that harness the energy of the natural hair movement and showcase the best brands for modern women of color.” For five years, Black women have gathered in Prospect Park to celebrate their perfectly coiled and curled crowns. It is one of the few large-scale events Black women have to specifically recognize the beauty in their natural hair.

Event organizers know their audience well. “They were playing Afrobeats when I walked in,” noted attendee Nadiya Issa when discussing her experience at Curl Fest. “Afrobeats, soca and reggae music reaffirmed the celebratory nature of the event.”

The energy in such an uplifting space was palpable. “It’s really nice to see so many Black women in one place for something positive,” said La-Kota Davis, a Sephora associate. With three years in her natural hair journey and a second time attendee, she said Curl Fest inspires her to try new styles with her natural hair. “My mom’s a hairdresser, so my hair was always bone straight from the time I was 10 years old. It’s nice to know that I’m not the only one who is embracing my natural texture.”

Essence Fest generated $1 billion in revenue for New Orleans earlier this month. According to Mintel, Black spending power is expected to increase to $1.4 trillion by 2020. The Black hair care market alone makes up $2.5 billion. Popular brands are trying to attract this audience with hopes that the Black community will spend their money on their products. Pantene launched a natural hair care line in 2016. L’Oréal launched theirs in 2013. The market researcher also reported that Black spenders on relaxer fell by 30.8 percent between 2011 and 2016.

Last year brought in 25,000 attendees, 70 percent of them women. It is safe to say the anniversary year brought in even more people. Brand partners such as Shea Moisture, Target, AT&T and BET recognize the value in engaging this specific audience.

Andrew McCaskill, senior vice president, Global Communications and Multicultural Marketing at Nielsen, pointed out why brands are becoming more inclusive to people of color. “With 43 percent of the 75 million millennials in the U.S. identifying as African-American, Hispanic or Asian, if a brand doesn’t have a multicultural strategy, it doesn’t have a growth strategy,” he said. “The business case for multicultural outreach is clear. African-American consumers, and all diverse consumers, want to see themselves authentically represented in marketing, and they want brands to recognize their value to the bottom line.”

Although big brands have ensured their stake in the natural hair care industry, Curl Fest also represented Black businesses as a whole. Vendors were able to apply for spots on the lawn to sell their fashions, beauty, home and food goods. Almost all of these vendors were Black businesses selling African-printed accessories, jewelry, skincare and more. For a newly burgeoning business, this event was an opportunity to reach more than 25,000 potential customers in one day.