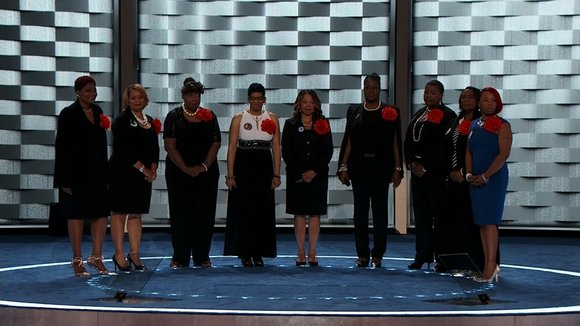 Mothers of the Movement" speak at the Democratic National Convention in Philadelphia, Pennsylvania on Tuesday, July 26, 2016. CNN

For Gwen Carr, mother of Eric Garner; for Geneva Reed-Veal, mother of Sandra Bland; for Samira Rice, mother of Tamir Rice; and for Valerie Bell, mother of Sean Bell — mothers whose children have been killed by police or died in their custody under controversial circumstances — there is no compromise on whether NFL players should continue their protest during the playing of the national anthem.

They understand that the players have much to lose. President Donald Trump has something to lose – racist momentum at the polls for midterm elections bolsters Republican candidacies – if he fails to stick his nose into the fray.