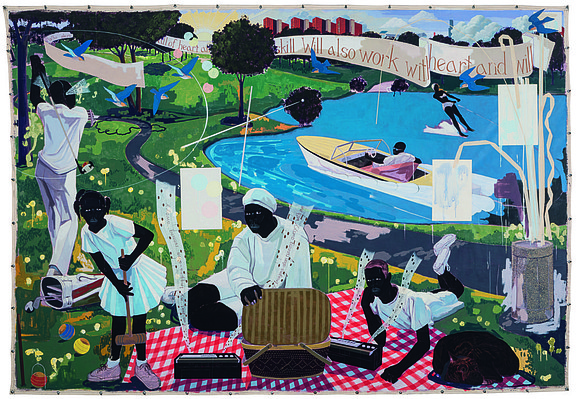 It has been reported that producer and entrepreneur, Sean “P. Diddy” Combs is the buyer of “Past Times” (1997) by Kerry James Marshall. The astronomical price, $21.1 million at Sotheby’s, means that it became a record-breaking sale. “The result is a world auction record for the artist, and is thought to be the highest price ever paid for an artwork by a living African-American artist,” reported Artnet.com.

There was also a bit of mystery surrounding the sale of the painting. Combs was not revealed as the buyer of the painting until two days after the auction. Marshall’s gallerist and dealer Jack Shainman revealed the buyer to The New York Times, saying, “I know that this work has found a home in a collection with purpose and an eye toward preserving legacy—that of Sean Combs, and that means a lot.”

Shainman also told The New York Times, “Combs was introduced to the painter’s work by a friend and sometime musical collaborator, the hip-hop recording artist and record producer Swizz Beatz. Swizz Beatz, who is performing this Sunday at The School, Mr. Shainman’s gallery in Kinderhook, N.Y, is an avid art collector with his wife, Alicia Keys.”

The hip-hop mogul was able to view the painting privately before the public auction. Marshall learned the buyer of this painting while in London speaking about his newest work, “Untitled (London Bridge)” (2017).