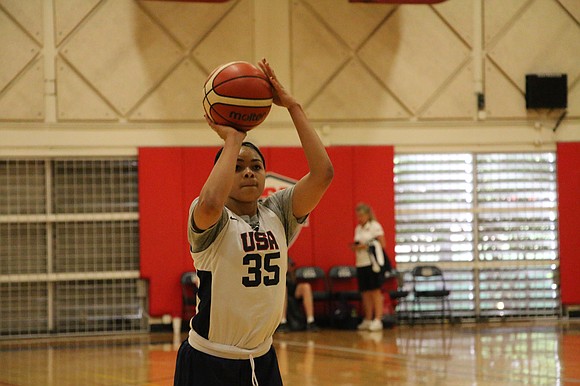 The second time was the charm for Harlem resident Jordan Nixon, who will represent the United States this summer at the 2018 FIBA Americas U18 Championship. A ferocious point guard bound for University of Notre Dame, Nixon was named to USA Basketball’s 12-member roster that will compete in Mexico this summer.

Nixon had previously tried out for USA Basketball in 2016, and although she didn’t make that team, she said the experience boosted her confidence. Having made a distinct impression, she was one of 35 hopefuls invited to try out last month in Colorado Springs.

“I wouldn’t say it was nerve-wracking because we weren’t doing anything we hadn’t done many times, and that’s play basketball,” said Nixon. “But the whole process as far as the tryout, preparing for training camp and playing international basketball before even delving into my freshman year is exciting.”

She added, “The three days I was in Colorado introduced me to different coaching styles—namely what is expected of a college athlete. I can take that with me into Notre Dame.”

Nixon returns to Colorado July 20 for practice, and the competition starts Aug. 1. The top four teams at the championship will qualify for the 2019 FIBA U19 World Cup.

It’s a repeat engagement for Celeste Taylor of Valley Stream, who is bound for Minsk, Belarus with the USA Basketball’s Women’s U17 World Cup Team. In the summer of 2017, Taylor was part of the team that qualified for the World Cup at the FIBA Americas U16 Championship.

“Last year definitely helped my game tremendously,” said Taylor, a combo guard. “I was the main defensive player. I took pride in defense just like I always have, but it helped me to understand that being part of team and making a huge impact is not just offense. Defense helped us win.”

This year, Taylor hopes to make an impact in any way that the coaches need. Heading into her senior year of high school, Taylor has already verbally committed to the University of Texas. The USA Basketball training schedule means she won’t be able to play AAU this summer. Although she’ll miss it, she’s eager to see what new elements she can add to her game, including leadership skills.

“It’s going to help me grow as a player and a person,” said Taylor. “That’s really important.”