NYC teens take over The Metropolitan Museum of Art 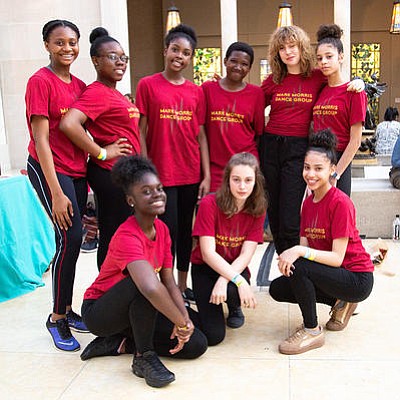 Democracy NYC had a table just beyond the main entrance of one of the greatest cultural institutions in the world, The Metropolitan Museum of Art. With the popular Met Costume Institute’s Heavenly Bodies exhibit as their backdrop, they were there to facilitate voter registration for some of the hundreds of young people who showed up Friday, June 1, in all their youthful excitement to celebrate a year of creative and cultural accomplishment. Called Teens Take The Met, it was a program built by teens for everyone to enjoy.

Teens Take The Met was an evening of education and fun for many of New York City’s youth who have spent their year immersed in approximately 40 cultural organizations located here, including The Studio Museum in Harlem, El Museo Del Barrio and Alvin Ailey American Dance Theater. Many of them also took part in The Metropolitan Museum of Art’s Teen Internship program. The Met offers internships both during the school year and in the summer, which give participants a chance to connect with professionals in the arts and to develop their own professional skills in creating art or in the many areas that support art, such as administration. Others were from across New York City. There were step teams, singers, spoken word, tattooing, book making, a silent disco party and much more dispersed across the esteemed museum’s sprawling 2-million-square-feet space.

At the Temple of Dendur in the Sackler Wing, with its slanted floor-to-ceiling windows showcasing Central Park and some of the almost 150-year-old museum’s stunning architecture, Mayor Bill de Blasio gave a rousing speech amid applause and cheers from those assembled. He used the occasion to not only celebrate the efforts of the teens involved but also emphasize the importance of voting. He implored everyone to make sure that they voted in the upcoming elections, saying, “For those of you who are 17 years old or older, have you registered to vote? If you want to start making change, register to vote.”

One of the people directly responsible for facilitating the event is New York City Commissioner of Cultural Affairs Tom Finklepearl. On hand for the occasion, he enthused, “I love the idea of Teens Take The Met. The idea of that word ‘take.’ It’s like this is your place, you are a New York City resident and this belongs to you. You pay what you want to enter. When I come to organizations like this, I always say ‘It’s city property and you own this building.’ So I think it’s a beautiful thing. Teens Take The Met is a great way of expressing that to young people.”

The Met’s education director, Sandra Jackson Dumont, was also present. She explained how the program fits in with the museum’s overall goals. “The importance of the event for The Met is that it celebrates youth voice and helps them understand how they fit in within the context of a global world, not just New York City,” she said. “The Met is also committed to be a safer place for young people. We also serve as a collaborator, a convener and a catalyst. Everybody has culture and everybody brings culture to the table. The role of The Met is celebrating that and helping people understand the roots of their culture and to help people understand that they already come to the table with it.”