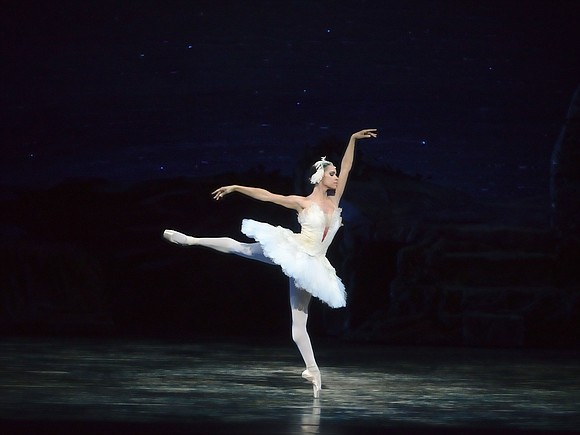 Misty Copeland, the American Ballet Theatre’s first African-American principal ballerina in its 75-year history, is featured in practically every ballet performed during the company’s current season (now through July 7). Making history with every pas de bourrée, she dances the lead in such iconic ballets as “Giselle,” “Swan Lake,” “Romeo and Juliet” and “Don Quixote” and in new works such as Alexi Ratmansky’s “Firebird” and “Whipped Cream” and Wayne McGregor’s “AFTERITE.”

In the contemporary “Firebird,” Ratmansky’s lusciously picturesque work set to Igor Stravinsky’s score, Copeland is the legendary creature who helps two lovers overcome an evil sorcerer. Wearing a flaming red costume with a feathered headdress, she captures the other-worldly quality of this magical, mythical bird in a performance that displays both her technical and dramatic brilliance.

“Giselle,” on the other hand is the epitome of classical romantic ballets and one of ABT’s signature productions. In it, Copeland, like so many great ballerinas before her, becomes the fragile young peasant girl at the center of this tale of love, betrayal, remorse and forgiveness through her seamless fusion of music and movement, making one the embodiment of the other. Shining in the ballet’s second act graveyard scene, Copeland embodies the spirit of the now dead young girl floating effortlessly and flawlessly through space, skimming the stage with pirouettes and jetés that seem propelled as much by the music as her passionate desire to save the life of the man she loves.

While Copeland’s technical skill is on full display throughout the season, so too are what has been called her “real acting chops.” As she embodies a character and communicates through movement, Copeland gives each arabesque and pirouette the subtle phrasing that transforms traditional ballet d’école steps into a language that tells a story filled with nuance and emotion. This remarkable quality has been evident throughout the season and will no doubt be apparent in upcoming performances of “Swan Lake” (Wednesday evening, June 20 and Saturday matinee, June 23) and “Don Quixote” (Wednesday evening June 27). Copeland will also appear in the delightfully light-hearted froth of a ballet that is Ratmansky’s “Whipped Cream,” a feast for the eyes that charms adults and delights kids Tuesday, July 3 and Friday evening, July 6. The beauty of ballet (and any dance, for that matter), for dancers at Copeland’s level, lies in the fact that no two performances are ever the same. The “Swan Lake” you see this season will be different from the “Swan Lake” you saw last season. Therefore, the audience is delighted by the evolving displays of technical brilliance and ever-changing interpretations reflected in nuances of phrasing.

Recently, the Amsterdam News caught up with Copeland in the midst of a whirlwind schedule of ballet classes, rehearsals, the launch of her latest signature Misty Copeland Collection of fitness gear for Under Armour—a mix of leather and lace—the media interviews and the excitement of upcoming appearance in the Disney live-action film, “The Nutcracker and the Four Realms,” starring Keira Knightley, Morgan Freeman, Helen Mirren and others, including Lil Buck. Then, too, there is her recent appearance in Drake’s “Nice for What” music video.

Chuckling when told she needs to be called Wonder Woman, Copeland said, “I was talking with my mother-in-law a few days ago and she was like, ‘I don’t know very many people who can go from the U.N. straight to do a Drake video.’” She was referring to the 2018 Diane von Furstenberg Awards celebrating women who are making a difference, such as Supreme Court Justice Sonia Sotamayor and Copeland.

Copeland said she is donating her $50,000 award from the Diller-von Furstenberg Family Foundation to the Boys & Girls Clubs of America, among others. “I came from an underprivileged community in Southern California and found among other organizations, ballet in my local Boys & Girls Clubs,” she said. She added that this whirlwind is “absolutely insane.”

Well, literally, a week later Drake reached out and when he explained the message, the idea of celebrating women, that won her over. Besides, Copeland is a “legit Drake fan.” “I’ve been a huge fan of Drakes for years for real,” she said. “I think he’s an incredible lyricist.”

Yet, she doesn’t hesitate to remind everyone that at the heart of this whirlwind is her love of and dedication to ballet and the desire to do all in her power to increase diversity in what has heretofore been a predominantly white world. In fact, during her recent Under Armour launch, Copeland invited a diverse array of ABT dancers to join her and show off her new line. One of them was another young African-American ballerina in ABT, Erica Lall.

“I was telling the dancers at ABT that I want to include them in every opportunity that I can because I feel like what I’m experiencing, the success, is all of our success,” said Copeland. “We’re all working toward a similar thing and it’s just amazing that ballet should be recognized. So, I got to select a very diverse group of people to join me for the launch.”

Speaking of Lall, Copeland said she first met the current member of ABT’s corps de ballet years ago while teaching a master class in California. Lall later received the first scholarship from ABT’s Project Plié initiative and joined the company in 2016. “It’s so wonderful watching her grow and mature and to have another Black woman in the company,” Copeland said.

Asked how she feels things are moving on the diversity front, Copeland said, “I definitely feel hopeful, but there is nothing that has happened that makes me stop and sit back and say, ‘Oh, my work here is done.’ I feel like this is the time to really start pushing and to keep the conversation going and to keep it relevant. I try to bring it to every conversation that I have and every opportunity and platform. The work will never end. It certainly doesn’t end with me, just as racism didn’t end with President Barack Obama. I think that we have to keep pushing.”