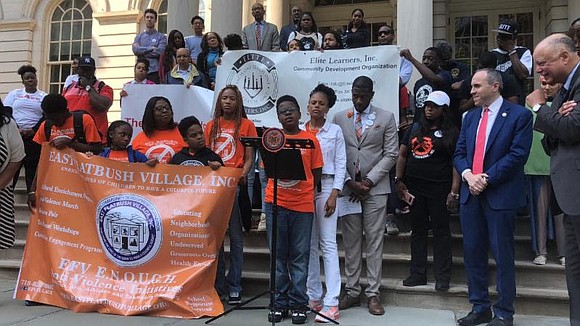 Students from the 45th District speak about the importance of a job. Office of City Council Member Jumaane Williams

Last Thursday, dozens of students joined elected officials and advocacy groups on the steps of City Hall asking for an increase to SYEP. The six-week program provides summer jobs to city youth in the age range of 14-24. The program also provides workshops on job readiness, career exploration, financial literacy and opportunities to continuing education.

Before this week’s fiscal agreement, politicians and advocates said the city was not investing enough in the program to provide universal placement for students, and young people were being turned away for jobs.

“For decades, the city’s Summer Youth Employment Program has connected young people with their communities, taught them financial literacy and prepared them for successful careers,” said Rose. “This is an investment in individuals and in the future well-being of our city, and our budget should reflect these values.”

Williams added that with June being Gun Violence Awareness Month, SYEP plays a vital role in keeping youth at work rather than on the streets.

“A summer job is about more than a paycheck. It’s about learning vital skills and providing our youth with a positive path,” he said. “There are tens of thousands of students being turned away from the program because of shortfalls in the funding allocated.”

SYEP was started in 1963 and is run by the Department of Youth and Community Development. According to the Community Service Society, only one in four young Black men are working.

“Expanding the number of summer jobs for our youth are among the most important racial equity interventions we can make,” said David R. Jones, president and CEO of CSS. “We know that young people are more likely to succeed in college and the labor market when they’ve had workplace experience. No student who wants a summer job should be without one.”

Although many are praising the mayor for adding 5,000 jobs to SYEP, some believe the city could do more.

“It’s a step in the right direction, but everyone that applies should be able to get a summer job,” said A.T. Mitchell, founder and executive director of Brooklyn-based youth organization Man Up! Inc. “Today young people can get a gun faster than they can get a job. Working people are less likely to commit a crime.”

Erica Ford, who is CEO of Queens-based anti-violence organization LIFE Camp, Inc., said that the city has too much money to not give more for SYEP.

“We really have to look at what’s important and invest money in our young people,” she said. “The more were keep them off the streets and engaged the more we can guarantee their success.”