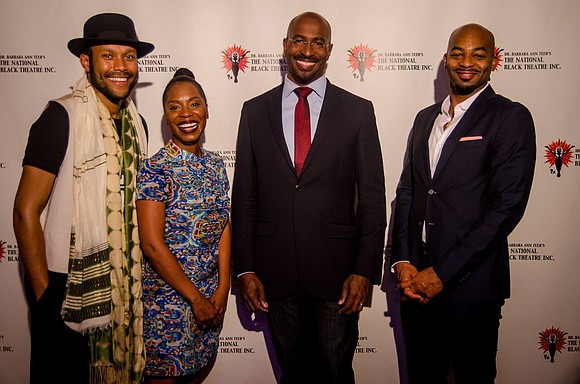 “NBT is your home away from home,” said Sade Lychcott, CEO of the National Black Theatre, the longest running Black theater in New York City. Last Wednesday, the NBT hosted the Teer Spirit Awards Gala to not only celebrate its “49 years of cultural liberation” but also to acknowledge artists of color who played the dual role of artist and activist, shifting the inaccurate mainstream constructs of the Black identity. The awardees included CNN political commentator Van Jones; actors Barbara Montgomery and Brandon Victor Dixon; and poet Abiodun Oyewole. With the gala celebrating Black artists serving as game-changers in the arts, Lyncott noted that the attempt to promote Black liberation is “not a moment, it’s a movement.”

Two months after Dr. Martin Luther King Jr.’s assassination, Dr. Barbara Ann Teer, Lychcott’s mother, founded the NBT at 2031 Fifth Ave. in Harlem. Despite the peculiarity of a Black woman starting a theater company at the time, Teer aimed to create a safe space for artists of color to fulfill her commitment “to ownership, self-empowerment, self-determination and full creative self-expression.” As the CEO of the community-based theater company for six years, Lychott continues her mother’s legacy by honoring and celebrating previous and current Black artists and activists.

As the mistress of the awards ceremony, Rhonda Ross honored the event, saying, “I’ve never been to an event quite like this one. This one is different because it combines activism and the arts in an organic, authentic, historical, ancestral way.” Along with many attendees wearing elegant Afrocentric attire, Ross hosted the night in a black corset, red suede pumps and an African-patterned evening coat; she classified her aesthetics as representing “Afro-centric rock,” adhering to her motto of “naming yourself.” Alongside their established roles, the Teer Award recipients continue to self-define their aesthetic roles and drive.

“I am an actor,” said Montgomery before accepting the 2018 Teer Pioneer Award, which celebrated the awardee who spent more than 50 years producing groundbreaking work in the arts. “I will act because I can, and I know how.” Despite her long-standing acting career, Montgomery noted that she cares more about the community than she does of prominence.

In addition to Montgomery, Oyewole was also a recipient of the 2018 Teer Pioneer Award. As one of the founding members of the American musical spieling group, The Last Poets, Oyewole ended his award acceptance speech with parting advice. “Understand what Black is,” he said. “It’s not a color. It’s not a complexion. It’s a reflection of all complexions called human.”