Drop me off in Harlem again: ‘Luke Cage’ returns 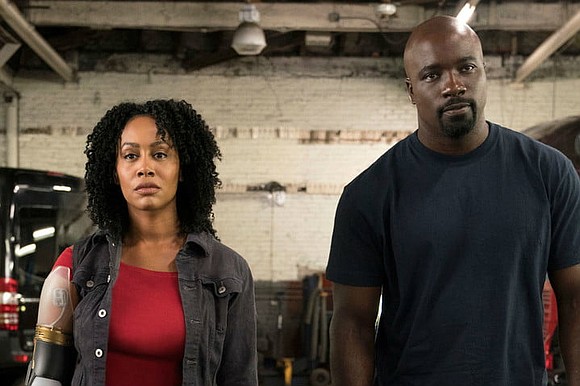 L.A. Williams: “Don’t front. You know I got you open” is a line from a hip-hop classic by Black Moon, but could also be attributed to “Black Panther,” the film that “got y’all open” to how enjoyable and inspirational a Black superhero tale can be. Now, four months later, Marvel hopes to replicate some of that success when “Luke Cage” Season 2 premieres this week on Netflix. If you’re intrigued but don’t know or remember his backstory and supporting cast, we’ve got you.

In 1972, Marvel debuted the first regularly published Black superhero comic, “Luke Cage: Hero for Hire,” which the Emmy-winning Netflix series is based on.

Williams: Since we routinely see videos of Black men getting shot to death in reality, it’s exhilarating seeing bullets bounce off one in fiction.

Bynum: Following his prison break, Cage devotes himself to coming to terms with his abilities and the responsibilities they confer: clearing his name and defending his neighborhood.

Williams: “Cage” characters exist in the same world as Wakanda, albeit a continent away. And if you liked those strong, diverse women, you’ll appreciate that…

Bynum: ...one of “Cage’s” strengths is the trio of Black women—Claire Temple, Mariah Dillard and Misty Knight—who drive much of the action. Claire, Luke’s sort of-girlfriend, has proven to be as indestructible as he is. She’s not a distressed damsel, but rather Luke’s most versatile resource. Ruthless, alluring politician Mariah cannot be deterred from taking control of Harlem, by any means necessary. Her behind-the-scenes machinations are more hazardous than the knavish cops and organized criminals combined.

Williams: The producers excel at taking one-dimensional comic villains like Mariah and fleshing them out to be fascinating TV characters. Misty, on the other hand, was always nuanced. She debuted when characters like “Foxy Brown” and “The Bionic Woman” were on big and small screens, so Misty is a bionic-armed P.I. in the comics with a name, style and job befitting a ’70s Blaxploitation character.

Bynum: Her journey from scrupulous detective to actual superhero accords the series its most compelling arc.

Williams: Then there’s Luke himself. Because people are multifaceted, different types of heroes appeal to different parts of our personalities. Part of us wants to be suave and strategic like James Bond or the Black Panther. But another part of us wants respect in these streets, a macho part that doesn’t need tactics because we can handle whatever comes. “The plan? These hands!” That’s Luke Cage. He’s essentially a super Stagger Lee.  He tells enemies, “You can’t hurt me. I won’t let you hurt those I protect. And if you try, I’ll hurt you.”

T’Challa, an African king, is aware of most American social issues, but they rarely affect him directly. But Cage embodies the African-American experience. Unjustly imprisoned. Scientifically experimented on. Surrenders his birth name and takes on a last name symbolizing his captivity. Lives in the hood. Has to work for a living. And is directly impacted by crime, politics, and race.

But there are differences between the screen and page Cage.

Bynum: The TV series focuses on Luke as a lone warrior. In comics, he’s affiliated with teams, including the Mighty Avengers, which is comprised primarily of heroes of color.

Williams: Also, comics Cage is considerably stronger and more invulnerable than on Netflix.  Comics Cage is a “hero for hire,” for security or super-villain clobbering. And (tiny spoiler) comics Luke would have never willingly returned to prison!

Comics Cage is from Harlem but, because he was a fugitive, didn’t live here. TV Luke is a Southerner, but his operating as a new local hero allows Harlem to be a de facto supporting character, and the producers terrifically capture our vibe and vitality. The show is filled with music, style and matters that genuinely reflect Uptown.