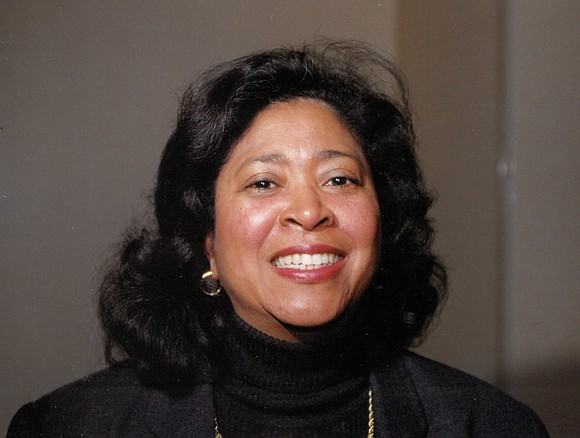 Carolyn Gross Norris passed away May 24, 2018, in Oneonta, N.Y. She was 73 years old and was the daughter of A. Stanley and Velma (Joell) Bascome. Carolyn grew up in Brooklyn, N.Y., where she attended Holy Rosary School and Prospect Heights High School. She graduated from Howard University in Washington, D.C. with a Bachelor of Fine Arts in Art Education.

While at Howard University, Carolyn was engaged in activities such as the Campus Pals and the Episcopal Students Association. She traveled along with her husband, Joseph “Joe” Gross Jr., of Detroit, Mich., and was committed to the Civil Rights Movement. In 1970, Carolyn and Joe traveled to Tanzania with their daughter, Janel, and lived and worked for two years until the birth of their son, Jawanza. She returned to New York in 1973 and worked in arts education at the YMCA in Queens, N.Y.

In 1976, Carolyn enrolled in the Postgraduate Premedical Program at Columbia University before entering in the New York University College of Dentistry. She obtained her Doctorate of Dental Surgery in 1981. Her postdoctoral training included Coler Memorial Hospital and Kingsbrook Jewish Medical Center. Carolyn worked more than 35 years as an attending dentist in prosthodontics and restorative dentistry throughout the New York City metropolitan area, including at Lincoln Hospital, Mt. Vernon Neighborhood Health Center, Yonkers Community Health Center and The New York Hotel Trades Council.

In 1994, Carolyn married Dr. Arthur Little Norris, of Teaneck, N.J. and the two lived together on the East End of Long Island, where they met two years earlier. They were very active with St. Mary’s Episcopal Church, Hampton Bays, N.Y., and joined the Long Island chapter of the Episcopal Cursillo Ministry together. In 1996, Arthur passed away while visiting their grandchildren in Maryland and Virginia. Carolyn remained in the Azurest community of Sag Harbor, until she returned to her beloved Brooklyn in 2001, eventually settling in Ft. Greene.

In 2011, she became a geriatric dentistry fellow, doing clinical research with geriatric psychiatric patients at SUNY Downstate Medical Center and serving as a clinician in general dentistry at East New York Diagnostic and Treatment Center. She was also a speaker on “Geriatric Oral Health for Ethical Elders” at New York City Ethical Culture Society, Ft. Greene Sr. Citizen Center and St. Philips Episcopal Church. Although Carolyn had a passion for working with seniors and the developmentally disabled, she spoke annually as a career day participant to students at Powell’s Lane Elementary School in Westbury, N.Y., and Frederick Douglass Academy VII High School and Satellite III Middle School 103 in Brooklyn, N.Y. Additionally, she served as a volunteer dentist for the Colgate Bright Smiles, Bright Futures mobile dental van providing free screenings to elementary school students in partnership with The Long Island (NY) Chapter of The Links, Inc., Psi Lambda Omega Chapter of Alpha Kappa Alpha Sorority, Inc. and the Greater New York Dental Meeting. In 2014, she moved to Oneonta, N.Y., and worked for Bassett Healthcare, and then worked for Oakdale Dental until she became ill in 2017.

Carolyn’s life was a blessing and her memory a treasure. She was loved beyond words and will be missed beyond measure. Her spirit lives on through her daughter Janel Gross, her son Jawanza Gross (Francoise), her step-daughter Tamu Seck (Maniang) and her six grandchildren, Jason Wright; Jasmine, Justine and Joseph Gross; and Madeline and Fatouja Seck, her sister Velma Bascome, her niece Michelle Blackwell and a host of family and life-long friends.