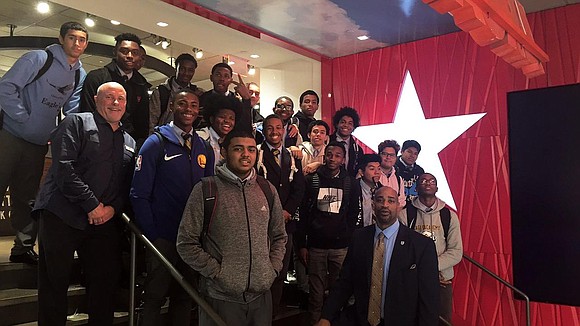 In October 2017, Macy’s launched a truly unique job- and college-readiness partnership with the Eagle Academy for Young Men in the Bronx. Every other month, the scholars—20 in total—from the prestigious New York City all-boys public school travel by subway to 34th Street to meet with members of Macy’s Diversity & Inclusion Strategy team, colleagues from diverse backgrounds and other guest speakers.

“Some of these young men have lived in New York City their entire lives without ever having traveled from the Bronx to Macy’s Herald Square,” said Aaron Barnette, Eagle Academy’s director of Strategic Partnerships. “It’s been phenomenal to expose our young men to this professional environment. These are the things that aren’t often taught in schools … and yet these are the things they will need to enter successfully and, most importantly, to remain in the workforce.”

These rising stars have been gearing up for success since joining Eagle, and in many ways the odds—and statistics—have been stacked against them. There are six Eagle Academy locations, one in each New York City borough and one in Newark, N.J. Each of the locations, serving grades six through 12, were strategically opened in neighborhoods that have been identified as pipelines to the prison system, Barnette explained. Now, these change agents are writing new narratives for themselves. The only statistics they plan to be a part of include the academies’ anticipated 95 percent graduation rate, as well as its 100 percent college acceptance rate.

And Macy’s is helping to make sure that happens. The students have learned valuable soft skills that often aren’t taught in schools—skills such as dressing, behavior and networking strategies. The goal is to provide them with their first glimpse of the professional world and to show them that the sky is indeed the limit.

“Success hinges so much on inclusion, exposure, access and opportunity,” said Doar-Page. “They are a group that doesn’t often get sought after for those things. We wanted them to see that Macy’s not only welcomes them here, but to expose them to our industry, our colleagues, and our company in a way that wasn’t just a one-time event.

“We envisioned a series that really could be impactful and built a sense of community with these impressive young men, while preparing them for the future. It has been as remarkable and rewarding for all of us who had the pleasure of engaging with all of them.”

In addition to Herald Square events, Macy’s sponsored a daylong mentoring summit and gift bags during national mentoring month at Eagle Academy’s Bronx location for more than 150 students from all of the Eagle Academy locations. A rites of passage ceremony, small group sessions and powerful talks from authors, mentors, athletes, clergy and empowerment speakers about manhood, integrity, leadership and success mindsets were held along with a lunch, awards program and basketball tournament.

“I really liked the session with [“The Man Book” author] Jareem Gunther,” said EA-Bronx Junior Edward Martinez about the Macy’s author discussion event in December. “I really connected his personal story with mine.” Macy’s gifted each student with a copy of the African-American author’s popular “how to” for young men of color at the candid discussion event and at the mentoring summit.