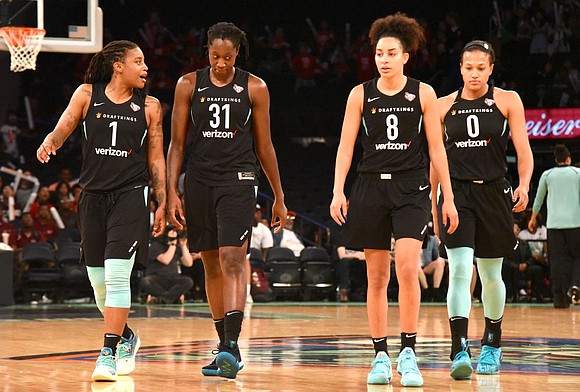 The New York Liberty headed to the West Coast on an upbeat note after a home court victory June 19, but the team was unable to sustain the momentum. Last Friday, the Liberty ran into the familiar Sin City saying, “The house always wins,” losing to the Las Vegas Aces 88-78.

“It was a tough one,” said Liberty coach Katie Smith. “We battled. I thought we came out during the second half and executed a lot better. We just had enough breakdowns to put us behind: offensive rebounds, sending them to the line and them hitting a few big buckets that we didn’t hit.”

Perhaps some gamesmanship by the Aces psyched the Liberty out. In the days before the game, the Aces touted a free agent signing of Lady Liberty, a replica of the Statue of Liberty on the Vegas strip, who now sports an Aces jersey.

With 14 points in the game, Tina Charles became the 19th player in WNBA history to pass 5,000 points, but that didn’t make up for the loss. “Everything feels better when you get the win,” said Charles, who noted that most of the Liberty players came into the game confident, having played for Aces coach Bill Laimbeer for several seasons, but the effort wasn’t enough.

Sunday, the Liberty headed to California to face the Los Angeles Sparks. The Sparks dismantled the Liberty and came away with the win 80-54.

“We’re not scoring the ball enough, and that’s going to hurt you in this league when everyone is good, and you need to score some points,” said Charles, who had only 10 points. “New York’s foundation has always been our defense, but right now we have been struggling to score the basketball and that’s really an importance in a whole bunch of games coming up. We don’t have a whole lot of practice time, so whatever it is, we need to stay confident in ourselves as individuals and what we do in this game to be able to score the ball.”

Tuesday night, the Liberty took on the Phoenix Mercury for the second time this season, and it was another loss, 83-69. The next few days are hectic—with two home games and two away games. The Liberty are in action at the Westchester County Center Friday against the Chicago Sky and Tuesday against the Seattle Storm.