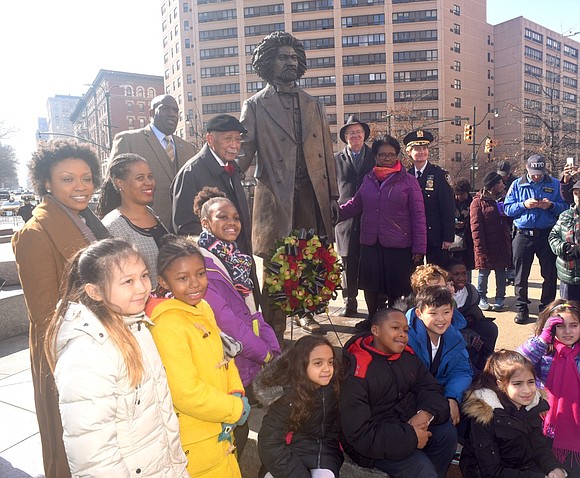 Many gathered at noon for a series of brief tributes and a laying of a wreath at the statue of Frederick Douglass at Manhattan’s Frederick Douglass Circle. Mayor David N. Dinkins, his wife Joyce Burrows Dinkins, Commissioner of NYC Parks William Castro and representatives from the Manhattan Borough president, state senator and N.Y. Assembly joined neighborhood community groups and local merchants to commemorate the 200th birthday of this great American. This bicentennial celebration was a kick-off to activities in Harlem to commemorate his life and work over the coming year.

Famed as an abolitionist, orator and statesman, Douglass achieved many accomplishments, summarized by Dinkins in these words, “Frederick Douglass was a social reformer and the beating heart and soul of the abolitionist movement in both New York and Massachusetts. The history of his leadership and dedication to our country’s adoption of a true commitment to the value of every U.S. citizen is undeniable and unmatched.”