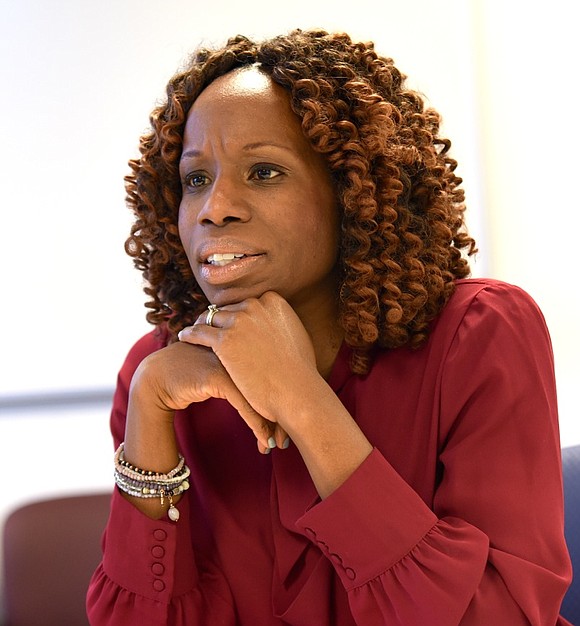 Relentless and vitriolic has been the focused assault on NYCHA in general and the city agency’s Chair and CEO Shola Olatoye in particular.

“I am solution-based,” Olatoye said in an exclusive interview this week. As she wrangles the burgeoning behemoth of a city within the city, “Let’s build a bigger table” is the mantra that Olatoye wants to emphasize as she seeks citizen, public and private partners to slay NYCHA’s demons. “I understand the anger. I hear the frustration as the head of this agency, but as I always say to my staff, ‘OK, so what’s your plan? Come to me with solutions.’ I don’t have all the answers. This is 40 years here—you guys want solutions in four years.”

The Harlem mother of three with one of the toughest and most visible jobs in the city acknowledges that there have been “leadership and management challenges,” as well as some basic issues that plague the biggest public housing system in the country.

“Rebuilding trust” through “community engagement” is key, she said.

With a staff of 11,000 with “a third living in NYCHA,” Olatoye said that she hears about the issues as she visits the developments almost daily or interacts with her staff in the field, in the wake of the New York Housing Authority’s 400,000 residents who were subjected to the failure of outdated boilers, resulting in horrific cases of no heat and/or hot water in the heart of bone-chilling winter storms. The anger was only partially soothed by Mayor Bill de Blasio’s announcement of a $200 million investment to replace boilers and to upgrade heating systems at 20 of NYCHA’s 326 developments enduring some of the worst outages. The outrage swiftly resurfaced, though, when it was reported that the 45,000 residents would have to wait until 2022 for all the renovations to be completed.

“I completely understand the feelings of dismay and disappointment that residents have as it relates to maybe their own conditions in public housing. My grandmother lived in public housing 30-plus years ago. I very much remember taking the elevators in Albany houses in Brooklyn in the 1980s, and being afraid of you know what you shouldn’t be afraid. The challenges that face the New York City Public Housing Authority haven’t happened in the last four years—this has been a 40-year long national story of the federal government stepping back, cutting its investment in public housing. The public housing program basically stopped in 1978, and has been in a steady decline since. In other parts of the country civic leaders made the decisions to whether be privatized or partner with the public sector or the private sector to rehabilitate their housing. So while they were all going left, New York made a very concerted decision to go right, and to not do that. So here we find ourselves, you know, in 2018 facing a significant capital backlog, meaning we have over $17 billion in capital needs, and really no clear sense of where that money is going to come from. President Trump just released a budget three weeks ago that essentially zeroed out the public housing program. So, while Congress passed a budget for a year and a half, we have 176,000 units. If we were a city we’d be bigger than Miami.”

Meanwhile, NYCHA is also dealing with the lead paint debacle. Tens of thousands of children put at risk for the failure to correctly declare, and then address the existence of lead paint in the apartments created screaming headlines and painful news clips.

All but grasping her chest, with a toddler at home, Olatoye said, “Of course I empathize.”

During a December City Council hearing, Olatoye said workers were certified by the U.S. Department of Housing and Urban Development while inspecting 4,200 NYCHA apartments. Apparently that was not the case.

At a City Council hearing last month residents delivered heart-wrenching testimony of hardship and suffering under dire living conditions unacceptable for a trillion-dollar city such as New York.

Olatoye was lambasted in the media. De Blasio ignored the demands and stood by his chair, who March 2 celebrated her fourth year at the helm of the agency.

She said corrective measures are in place, acknowledging that the community is frustrated by the pace.

She said, “The lion’s share of the conversations that I have with residents are about those basic things; that does not mean that we don’t have a legal obligation to ensure we are in compliance with local and federal law as it relates to lead paint safety, and that’s what we are standing up to do right now…to make sure that that is the case…and we also have to make sure that the roofs aren’t leaking, that the heat is working. Two-thirds of our buildings are 60 years old or more, and they haven’t been kept up.”

She continued, “The mayor hired me to fix problems after 40 years of disinvestment. There are problems that are deep and they are structural, and they’re not going to be fixed in four years and they’re also not the result of one person. This agency is bigger than one person. We have 11,000 employees, one-third of whom live in public housing—that’s 4,500 people. Those who live and work in public housing have a really interesting perspective.”

Calm and collected, Olatoye explained, “I think it is intellectually dishonest to not recognize that this agency has lost $3 billion in [federal] funding since 2001—that is a real fact. I also know there have been leadership and management challenges, but I don’t know—any large complicated bureaucracy has its challenges, whether it is public housing or private entity.”

That $3 billion cut by the federal government is showing up in the homes of the residents.

Olatoye said, “The challenges that face the New York City Public Housing Authority are going to need to be met head-on. I think this mayor has done that.”

Does the buck stop with him?

She responded, “He’s the mayor. The people of New York elected him. So public housing is still a publicly funded program. What he has done more than any other mayor is invest public resources in it, whilst also trying to deal with a million public school children, public safety and business and economic and development for the greatest city, largest city, in the country. I think he’s done a tremendous amount of work. Is there more to be done? Absolutely, and I’m always going to be the loudest advocate at the table saying we need more and be more—that’s my job. But, I think we should not let Washington off the hook—even this administration. We know how to make communities safer, cleaner and better for our residents, but it requires money, constant attention, focus and investment.”