McCollough celebrates another birthday and basketball 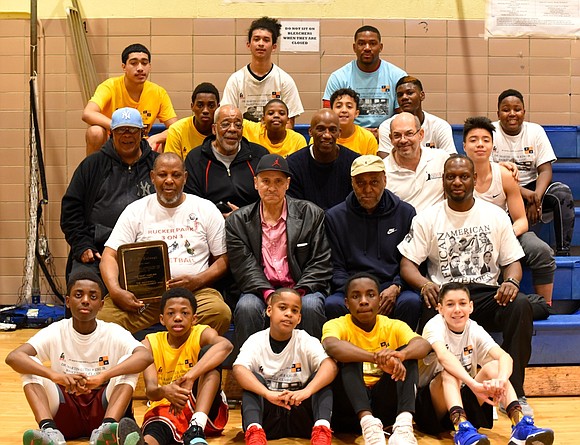 It was the wrong season and too rainy, too wet to pay homage to Bob McCollough on his 77th birthday at the Rucker Park, uptown Harlem, so the celebration was held at the next best place, McCollough’s other favorite location, El Faro Beacon on East 122nd between First and Second avenues. It’s where some of New York City’s basketball elite, along with some of McCollough’s dearest friends and family members, gathered Saturday afternoon to celebrate the occasion.

Steve Burt, Fred Crawford, Joe Hammond, Tony Greer, Butch Purcell, several of the 50 Greatest Rutger Pro League players, Santos Negron (the co-founder of the Legends of Puerto Rico) and a host of others were there.

“I’m happy that everyone here could take time out of their schedules to be here with me today,” said McCollough while taking pictures, watching his young grandson run around tirelessly, enjoying all of the food and the Beacon’s annual Dr. Martin Luther King Jr. All-Star Classic in the gym across the hall and all of the kind words bestowed upon him like those of Burtt.

“Bob’s been a great mentor to me,” said Burtt, the head coach of the Mott Haven High School Boys Varsity Basketball Team in the Bronx.

“I went through his programs [as a young player],” Burtt continued. “They helped me as a person, as a ballplayer, definitely, and as a man now. Some of the things that I do in my programs, I try to emulate the way Bob guided his. And the same way that he gives back to the community, I try to do the same, because it’s important that I give back like Bob and others who’ve helped me.”

And McCollough is quick to brag about Burtt’s accomplishments, too. He reminds you that Burtt is the all-time leading scorer at Iona College, of his degree and that he was drafted by the Golden State Warriors.

“He’s been somebody that I can emulate,” said Burtt.