Anna Murray Douglass, more than a ‘helpmeet’ for her famous husband 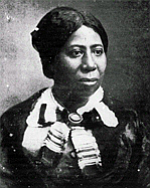 A week or so ago, I had the distinct pleasure of sharing a podium with Lloyd Weaver, the great-great grandson of the incomparable Frederick Douglass. During his presentation, Weaver laid out portions of his remarkable genealogy, including Anna Murray, Douglass’ first wife, his great-great grandmother.

There wasn’t much time to devote to Anna Murray Douglass during the conversation with Dr. Brenda Greene of Medgar Evers College, but Weaver did provide enough information to spark one’s curiosity about this woman who was indispensable to Frederick Douglass’ magnificent achievements.

Douglass is well into his first autobiography “The Narrative of the Life of Frederick Douglass,” before Murray is mentioned. By this time, he had made his escape from Maryland, thanks to Murray’s help, and found a refuge with David Ruggles, the noted abolitionist in New York City. Almost immediately upon arriving in the city, he sent for Murray and they were married by the Rev. J.W.C. Pennington, himself a fugitive slave. “Upon receiving this [marriage] certificate,” Douglass wrote, “and a five-dollar bill from Mr. Ruggles, I shouldered one part of our baggage, and Anna took up the other, and we set out forthwith to take passage on board of the steamboat John W. Richmond for Newport, on our way to New Bedford.”

In his first of three autobiographies, Douglass often withheld many details of his escape to protect those who helped him, and that might have been one of the reasons he waited until succeeding books to elucidate on Anna Douglass and the importance she was to his life and legacy.

Born free in Maryland in 1813, and five years older than Douglass, she was one of 12 children born to Bambarra and Mary Murray. She was a teenager when she began working as a domestic servant for a wealthy French family in Baltimore. Shortly, she found comfort and companionship in one of the city’s improvement societies. It was perhaps in one such gathering that she met Douglass, who had not yet changed his name from Frederick Bailey. Central to their courtship was Murray’s determination that Douglass obtain his freedom. From her nearly decadelong savings she presented her future husband—who insisted he wanted to be free before their marriage—with the means to facilitate his escape.

After their marriage, the couple settled briefly in New Bedford, Mass., before moving on to Lynn, Mass. and later to Rochester, N.Y., where their home was part of the Underground Railroad and a safe house conduit for runaway slaves. Here, Anna Douglass, often in the absence of her husband, was the conductor, providing the fugitives with temporary accommodations and consultation. Douglass, after ascending to national celebrity with the publication of his slave narrative and as a newspaper publisher, was often on speaking tours for various abolitionist groups. Meanwhile, Anna Douglass, soon with four children, had to assist the runaways, manage the household chores and finances and care for her brood.

In a letter to one of his former owners, Douglass cited some of the invaluable assistance from his wife in their early years together. “Instead of finding my companion a burden,” he wrote, “she was truly a helpmeet. She went to live at service, and I to work on the wharf, and though she toiled hard the first winter, we never lived more happily.”