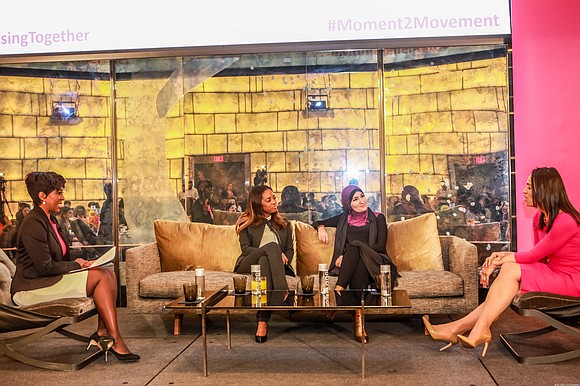 As the nation kicked off Women’s History Month, the Federation of Protestant Welfare Agencies hosted Rising Together: Local Women Leading Change, a breakfast to celebrate the impactful work of local women who have advanced progressive and catalytic change. At the event, held Friday, March 2, at the Park Hyatt in Manhattan, prominent New York women discussed how this moment of increased focus on equity as demonstrated by the Women’s March and #MeToo can become a lasting movement for change. Honorees included U.S. Sen. Kirsten Gillibrand; Tamika D. Mallory, Carmen Perez, Bob Bland and Linda Sarsour, national co-chairs of the Women’s March; Joanne N. Smith, founder and executive director of Girls for Gender Equity; and Glynda C. Carr and Kimberly Peeler-Allen, founders of Higher Heights for America.

In the wake of the new presidential administration, women have organized, marched in the streets and demanded to be heard. Rising together to change politics and society, these women and millions of others answered the call for more aggressive engagement around gender equity, sexual harassment and other issues restricting the progress of women.

The FPWA, an advocacy organization that fights for low-income communities, wanted to create space for these women to continue their momentum by sharing ideas for change and action. At the breakfast, more than 100 influential New York City women discussed voter participation, increasing awareness of women’s issues in government and boosting engagement in future elections.

“We were truly inspired by the women who gathered for the Rising Together event—the very change makers seizing moments and leading movements for more inclusive communities across our nation,” said FPWA CEO and executive director, Jennifer Jones Austin. “One thing that’s resoundingly clear is that women are leading. Women are stepping up and becoming change agents. We’ve been on the front lines forever, but we’re now filling leadership roles like never before—and this bodes well for our communities. I’m absolutely inspired.”

The breakfast featured a special message from Sen. Gillibrand.

“I’m very proud to stand with FPWA, which has been built on the goals of reducing poverty, advancing opportunity and sharing in prosperity—essentially, love others as yourself,” said Gillibrand. “This core value informs all that we do. More women than ever before are raising their voices, speaking out and demanding to be heard—and it is changing our country for the better. The next chapter of the women’s movement is being written, and it’s up to each of us to keep raising our voices and fighting for what we believe in.”

Cheryl Wills, anchor of “NY1 Live at Ten” and host of “In Focus with Cheryl Wills,” served as mistress of ceremonies and co-led two panel discussions around seizing moments, and turning those moments into rousing and historical movements. Donna Lieberman, executive director of the New York Civil Liberties Union, also served as co-facilitator.

The first panel of the morning, moderated by Austin and Wills, focused on capitalizing on moments, and putting drive into action. It featured two co-chairs from the historic Women’s March, Tamika Mallory and Linda Sarsour.

“We’ve built an intersectional platform that no one has ever seen,” said Mallory. “The very foundation on which the Women’s March particularly stands on is the fact that some of us put everything on the line for it to be as it is.”

“The truth is we are uncomfortable: not everyone likes us speaking truth to power,” said Sarsour. “But challenging people’s internal biases is part of who we are—it’s part of what we have to do to move our cause forward.”

The second panel, co-facilitated by Lieberman, centered around how women, at all levels of the community, are sparking movements, and what is necessary to keep up the moment. Smith and Carr discussed the visions for their organizations as well as elevating the voices of women and girls of color.

“Thank you for recognizing Girls for Gender Equity as a local change maker,” stated Smith. “At GGE, we are committed to the physical, psychological, social and economic development of girls and women, knowing that when we support cis and trans girls and women of color, alongside GNC and non-binary young people, we ultimately support the whole community. We are thrilled to accept this award and look forward to leading social justice strategies that foster the growth and fulfillment of all its members.”

“We are honored to receive this award from FPWA on behalf of our work with Higher Heights,” stated Carr. “It is critical that we continue to create and expand opportunities for women and communities of color to take on leadership roles in civic engagement and advance progressive public policies.”

Peeler-Allen added, “Gatherings like the FPWA women’s breakfast provide us with an opportunity to not only reflect on all that we’ve accomplished, but to collaborate and strategize on how we can continue to work together to build sustainable communities across the country and the nation.”

The event was sponsored by the New York Women’s Foundation.

“We are thrilled to support FPWA in their efforts to uplift the critical leadership of women working to improve the lives of women and girls in New York City and communities across the nation,” said Ana Oliveira, president and CEO of the New York Women’s Foundation. “Women’s leadership has been central to progress in many areas and it is crucial to give proper recognition to those who continue to carry this work forward. Congratulations and thank you to the honorees, Sen. Gillibrand; the national co-chairs of the Women’s March, Joanne N. Smith, Glynda C. Carr; and Kimberly Peeler-Allen who exemplify transformational leadership.”