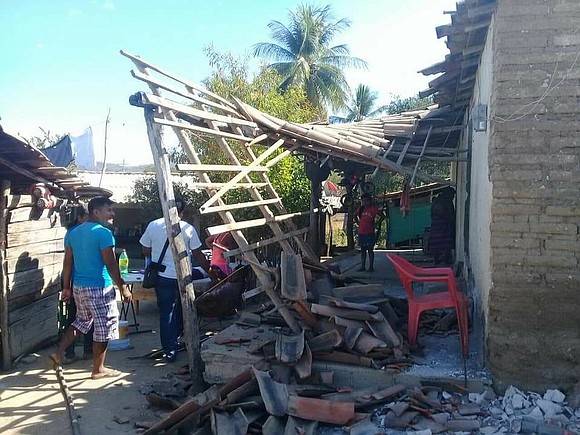 The quake—with epicenter to the south, in the city of Puebla—shook Mexico City for 20 seconds. It toppled 44 buildings, trapped people in rubble, ignited fires and left more than 200 dead.

It was a devastating natural disaster, to which Mexico’s national government and even international agencies, responded.

Friday, Feb. 16, 2018, a powerful 7.2-magnitude earthquake hit the southern state of Oaxaca, Mexico. According to the United States Geological Survey, the epicenter for this earthquake was in the town of Pinotepa Nacional, an impoverished municipality with a population of 31,900 mostly Black and indigenous Mixtec people.

This earthquake also set off shockwaves in Mexico City. But after the determination that the quake did not cause any major damage in the capital, little attention has been paid to the fact that people living at the epicenter are still suffering. In Oaxaca, official buildings and small houses now have major cracks in the walls.

Many residents are so afraid of sleeping in their homes—particularly because aftershocks continue in the area—that they are sleeping either under trees or beneath canvases tied between trees.

Oaxaca residents say they have received little to no help for their damaged buildings from governmental or aid agencies. “Nobody has come to help us,” Margarita Gómez Gallegos, a 64-year-old Mixtec indigenous woman, complained to Noticias Voz e Imagen de Oaxaca newspaper reporter Octavio Vélez Feb. 26. Gómez Gallegos had lived in her home for more than 30 years. Her late husband had built it himself out of adobe and decorated it with tiles, but the earthquake has left it near collapse.

Most of the homes in the region are like that of Gómez Gallegos—made of mud brick adobe and at risk of crumbling after the walls have been cracked.

Most Oaxacans claim to have had no government representatives reach out to them, but others reported that bureaucratic officials have been in contact. However, all they have done is note that the earthquake caused damage in the area. No further contact or help has been provided.

One local politician, Tomás Basaldú Gutiérrez, felt so bad for the Oaxacans who have received no assistance that he organized a group to travel throughout the affected region handing out food and aid. And a local promoter, Baltazar Velazco, is organizing an Arts Marathon featuring the work of local musicians, painters, photographers and poets to raise funds for those in need of aid. The Arts Marathon is scheduled for March 11.

The local civil rights organization, Organización para el Desarrollo Social y Productivo de los Pueblos Indígenas y Comunidades Afrodescendientes–Socpinda A.C., is urging those who want to donate tents or materials to help those in need to contact them at organizacion.socpinda@gmail.com. If you can donate funds, send it to Socpinda A.C. through their Banco Santander account number, which is 65 50399471 7.