Oscar was hit with the Wakandian effect! 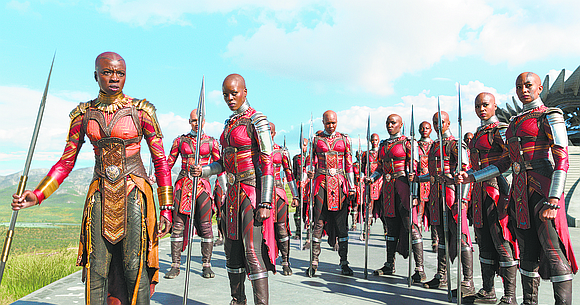 Going into Sunday’s Academy Award ceremony, there were little to no expectations for the home team. A win in any category would be cause to celebrate. Truth be told, however, one particular win would have had a Wakandian effect on the African-American community.

What if Mahershala Ali had uttered, “And the award for best supporting actress goes to,” and revealed the winner to be Mary J Blige? There would have been some call in sickeration, celebration throughout the nation in this dance-er-ree, come Monday. How ironic would it have been to have her share an honor with, among others, Mo’Nique, in a film seen exclusively on Netflix. Although she wasn’t called to receive the statue, her name is etched in history as she stands as the first person nominated for Academy Awards for acting and writing an original song in the same year. Now that the chains have been removed, maybe we can expect to see Mary with the prize.

The Academy did recognize with their highest honor the work of Kobe Bryant for Best Animated Short for his ode to his first love turned film, “Dear Basketball.” So as if the game in which his superlatives include five World Championships (two of those where he was named the Most Valuable Player), two NBA Scoring Championships, NBA Slam Dunk Championship and two numbers retired by the storied franchise that is the Los Angeles Lakers, the same passion and creativity for that entity was transferred into another outlet to produce upper-echelon results.

Jordan Peele entered the annals of history as well, becoming the first African-American to win for Best Original Screenplay for his brilliant “Get Out.” The film also received three other nominations (Best Picture, Best Director and Best Actor for Daniel Kaluuya) and earned $250 million. Tally those numbers together and we have the makings of a potential powerhouse foundation of African-Americans in Hollywood.

Fresh from the NAACP Image Awards, Leon W. Russell, chairman of the NAACP National Board of Directors, sees the potential and offered, “The NAACP is delighted that so many of the Oscar nominees reflect the exceptional work of people of color. The importance of having and recognizing diversity both in front of and behind the camera can’t be overstated. To have so many Oscar nominees who were also this year’s Image Awards winners is a true testament to the work we’ve been doing. We also congratulate Image Awards winner Jordan Peele for being only the third person in Academy Awards history to be nominated for directing, writing and producing in the same year, and for being the first Black screenwriter to win an Oscar in the Best Original Screenplay category. The entire motion pictures viewing public wins when the Academy recognizes the creative successes of all who work in this industry. The Academy’s winners are our winners, too.”

Two steps forward. Let’s see where it leads us. That’s a wrap for now.