Sophisticated, yet casual chic for fall ’18 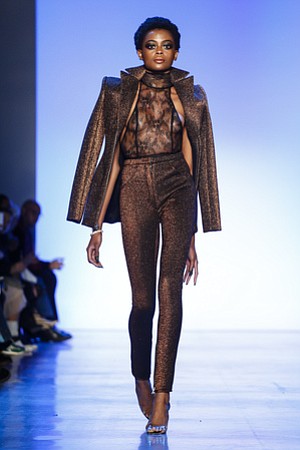 Queens, N.Y. designer Laquan Smith stepped it up for fall/winter 2018. His collection was outstanding. For men, his fur-trimmed coats were spot on and received applause coming down the NYFW runway. The women’s fashions were sexy, bare-to-there and sleek. He used sheer and shiny fabrics, leathers, textiles, lace and silky prints. Inspired by his grandmother in his early years, he became a skilled tailor and patternmaker.

Smith started building his career at the age of 19, and worked as an apprentice with Blackbook Magazine and other famous stylists. Back then, this African-American designer developed his first line of separates and accessories. His distinctive styles sparked interest among fashion icons, including Rihanna and Lady Gaga. Smith’s work also intrigued Vogue Magazine’s Editor-at-Large Andre Leon Tally, who selected Smith as his mentee. On the runway, other celebrities such as Serena Williams have modeled for this designer. In addition to his robust celebrity clientele, Smith’s signature styles have been spotted on Beyoncé, Jennifer Lopez and Kim Kardashian. Smith also caters to a private-order clientele.

Known for her signature graphic prints and innovative silhouettes, New York designer Nicole Miller offered modern, ageless clothes for fall/winter 2018. Her looks were layered. The top coat is the main component, covering a blouse under a sweater and over pants or a short skirt. Every piece is hanging out, making its own statement in shape and color. It’s all about comfortable dressing and a casual elegance. There were lots of blues combined with berry-hued prints. Her lengths varied.

With a degree in fine arts from the Rhode Island School of Design and a degree from l’Ecole de la Chambre Syndicale de la Haute Couture Parisienne in Paris, Miller combines her art training with couture technique. Her looks were young and colorful.

Also at NYFW, Concept Korea introduced two young womenswear designers, Lie and Greedilous. At Lie’s presentation, there was an emphasis on “everyday wear luxury with a twist.” Innovative design elements and details added to this beautiful contemporary line. To highlight the brand’s vision, signature tailoring was combined with an experimental use of various fabrics. The collection offered well-made clothing that was minimalism at its best, meeting New York style with a Parisian-avant-garde twist.

Greedilous’s overall collection theme conveyed feminine styles for professional women. They titled their styling concept Futuristic Modernity. The designer utilized intricate silhouettes with strong visuals. Concept Korea is a collaborative project to promote Korean fashion designers and assist them in their attempts to break into the U.S. fashion markets.