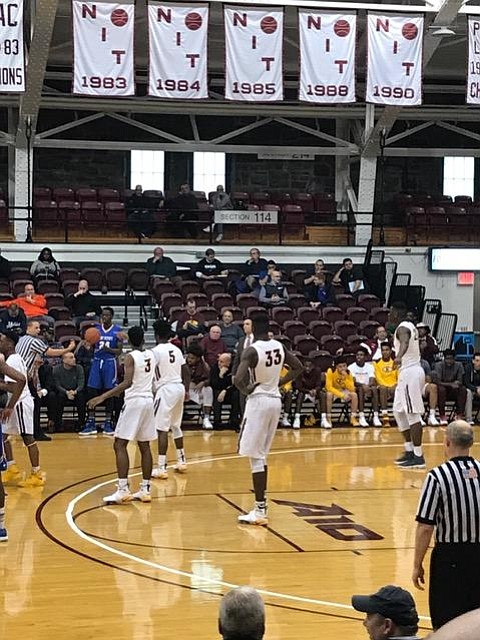 The top four seeds in the PSAL Boys’ Varsity Basketball AA Division reached the semi-finals with wins this past Saturday at Lou Carnesecca Arena on the campus of St. John’s University.

The No. 1 seed, South Shore, will face fourth seeded Curtis at Carnesecca this Saturday at 3 p.m., and the No. 2 seed Jefferson will take on third seeded Cardozo at noon to begin the schedule. The winners will meet in the city championship game Saturday at Barclays Arena in Brooklyn at noon

The 18-8 South Shore Vikings easily handled ninth seeded Paul Robeson 89-62 to affirm their status as the favorite to capture the city title when the playoffs began. After holding a slim 10-9 lead at the end of the first quarter versus the Bronx Borough champion Eagle Academy, the Jefferson Orange Wave (21-7) outscored the No.7 seed Eagles 23-14 in the second quarter and held them to 2 points in the third, earning a 56-38 victory.

The 2014 city champion Cardozo Judges’ aspirations of winning another chip was in peril after starting the second quarter down 18-4 to No. 6 seed Boys and Girls High School in their quarterfinal match up. However, trailing 29-18 at halftime, the Judges (25-3) outscored the Kangaroos 21-6 in the third and held on for a 60-55 win.

The Curtis Warriors (25-5) needed two crucial foul shots from senior Malik Martin with 3.1 seconds remaining to escape with a 53-52 victory over the No. 5 seed Lincoln Railsplitters. A last second desperation shot by Lincoln fell short as Curtis moved into the final four grouping.

Weather permitting, the CHSAA was scheduled to hold its version of the Final Four last night at St. John’s with Archbishop Molloy, led by sensational junior point-guard Cole Anthony, set to meet up with Stepinac and Christ the King, looking to upend defending Catholic school city champion Cardinal Hayes. The winners will advance to finals at Fordham University Sunday.