Will the Bronx’s Saquon Barkley be the Giants’ man? 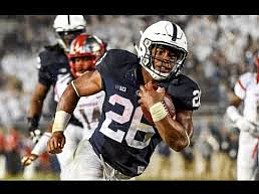 At the NFL Combine, held last week and early this week, former Penn State running back Saquon Barkley cemented his standing as the most dynamic and complete offensive player entering next month’s draft.

A native of the Bronx, Barkley moved to Bethlehem, Pa., when he was a young boy. Now 21, the 6-foot, 230-pound nephew of former three-weight world champion Iran Barkley is a unique talent who is coveted by many teams in need of a game-changing, versatile offensive player. The New York Giants are certainly in the market for an elite running back.

Barkley grew up a Jets fan, and his father, Alibay, who was also once a promising boxer, has a tattoo of the Jets on his left forearm. “My dad said I used to sit there at a very young age and watch football,” said Barkley at the Combine. “[I would tell him], ‘I’m going to play for [the Jets] one day.’”

His boyhood dream is highly unlikely, at least not until he becomes a free agent years from now. The Jets hold the No. 6 pick in the draft, and Barkley won’t get past the Giants, who have the second overall pick. If the rumors swirling after the Combine are solid, there is a strong possibility the Cleveland Browns will select Barkley with the No. 1 pick, and then take a much needed quarterback at No. 4, the second of their two first round picks.

The debate that has ensued among Giants fans and football cognoscenti over the past week is if Barkley is available at No. 2, should the Giants take him or draft a quarterback to be the successor to 37-year-old Eli Manning? The dynamic Barkley will provide instant help to a Giants running game that ranked 26th out of 32 teams last season and 29th in 2016.

The counter argument is the QB position is the most important in football and the Giants have a rare opportunity to be near the top of the draft to take a highly rated prospect. Among the possibilities Sam Darnold of USC, Josh Allen of Wyoming and Josh Rosen of UCLA.

During the Combine, Giants general manager Dave Gettleman said he is even open to trading the pick if it is the most logical judgement to improve the team.

“Are we open for business? Any decision I make will be in the best interest of the New York Giants. Plain and simple,” said Gettleman as reported by multiple media outlets. “If someone makes me an offer I can’t refuse, would I move back? It depends upon who’s there.”

He continued, “If there is a guy worthy of being the second pick of a draft, and what we’re basically saying if we answer that question in the affirmative is that you think you’re drafting a Hall of Fame player. So you can’t get too cute about the whole thing. Does that make sense?”

It makes perfect sense. So does Barkley in a Giants uniform.