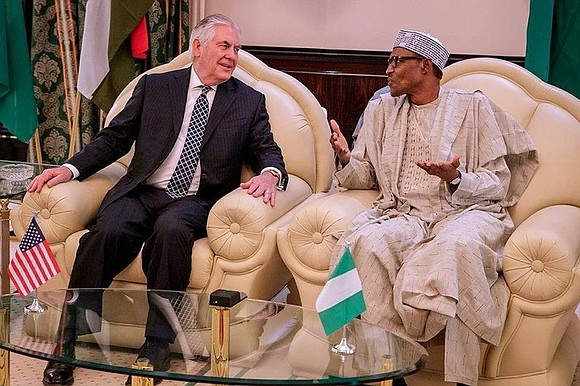 (GIN)—An extended visit to Africa this month by the U.S. secretary of state to mend fences after the president’s crude description of African and Caribbean countries was cut short this week by the dismissal of the embattled Secretary Rex Tillerson. GIN

(GIN)—An extended visit to Africa this month by the U.S. secretary of state to mend fences after the president’s crude description of African and Caribbean countries was cut short this week by the dismissal of the embattled Secretary Rex Tillerson.

The president —who has long clashed will Tillerson—felt it was important to make the change now, as he prepares for talks with North Korean leader Kim Jong-un and for upcoming trade negotiations, three White House officials said.

“[The president’s] statements shocked almost all Africans,” Chadian Foreign Minister Mahamat Zene Cherif said at a news conference while seated next to Tillerson. He added, “We made efforts on either side to move ahead and look at the future with optimism.”

Quietly, however, Chadian President Idriss Déby made his anger known about his country being targeted in a Muslim travel ban, despite close working relations with the U.S on anti-terrorism.

Other planned activities that were called off included the laying of a wreath at the memorial to victims of the 1998 U.S. embassy bombings in Nairobi and Dar es Salaam, and a working luncheon with Kenyan leaders.

A full day of meetings in Nigeria was reduced to a quick chat with President Muhammadu Buhari and his foreign minister before Tillerson hopped a flight home.

Among the responses to the State Department’s visit was a published piece by visiting professor of international relations at South Africa’s University of the Witwatersrand, Joseph J. Stremlau, titled “Three Reasons Why Africa Should Treat the Visit with Skepticism.”

“Evidently, counterterrorism is America’s main Africa concern,” he wrote. “If Trump and Tillerson were seriously interested in issues of trade, public health and good governance, he would have at least included democratic South Africa on his agenda. Instead, Tillerson has prioritized repressive governments and ones under states of emergency.”

Stremlau’s second reason for skepticism is that the U.S. hasn’t shown much appetite for diplomatic engagement with Africa since Trump became president. “By contrast, the U.S. military is already deeply engaged in the struggle against terrorism,” he said.

He continued, “Neither Trump or Tillerson has announced an overarching Africa policy. No assistant secretary for Africa has been named; important embassies, including in South Africa, lack ambassadors. This is in sharp contrast to the U.S.’s active engagement on the military front.”

“Finally,” Stremlau concluded, “Tillerson has no credibility. He has been publicly criticized and even mocked by his commander in chief. Rumors persist that he will resign or be fired. And any claims that the government he represents means what it says is undermined by Trump’s own false or misleading statements.”

“Africans should also remind Tillerson of their appreciation of China’s increasing importance as their leading development partner,” Stremlau urged.

He added, “It’s worth recalling that since the 1990s, Congress has consistently supported expanding economic and political partnerships with Africa. The reason for this is that congressmen have been pressed to do so by African-Americans, as well as other sympathetic elements in America’s diverse civil society, business and philanthropic sectors. Networks such as these, as well as close ties at state and local government level that stretch throughout Africa, may indeed be more important in the long run.”