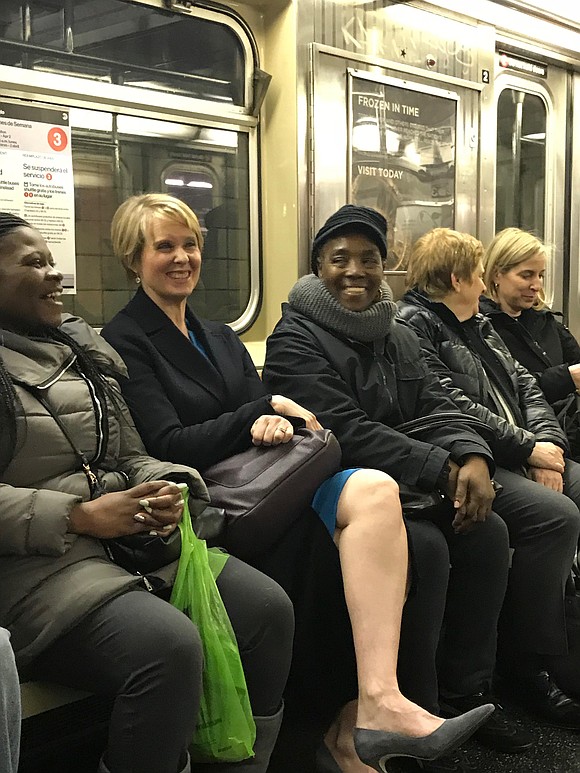 Carved into the front desk of the Bethesda Healing Center in Brownsville, Brooklyn is the phrase “We are destined to win.” Approximately 30 feet away from the desk stood actress Cynthia Nixon, of “Sex and the City” fame, hoping to make that statement a reality.

Tuesday, Nixon detailed her platform a day after announcing her candidacy for New York State governor. Challenging current Governor Andrew Cuomo, Nixon told those in attendance one of the reasons she broke from the governor to take him head on.

"Eight years ago, I voted for Andrew Cuomo because I believed he was a real Democrat,” Nixon said from the podium. “But since taking office, he has shown us his true colors. Today New York schools are the second most unequal in the entire country. And the gap between the richest and poorest schools has grown wider today under Andrew Cuomo than it’s ever been. New York State itself is the single most unequal state in the country.”

Hours later, when speaking to the AmNews in her first one-on-one interview, Nixon broke it down further.

“I think the influence [of money] in New York State has made it the single most unequal state in the whole country,” Nixon said. “And our schools are the second most unequal in terms of funding. So if you’re telling me I shouldn’t be talking about those things … you don’t have a right to silence me.”

Nixon continued, “I think the influence of big money is destroying our country. That’s how we got Donald Trump. He was talking to working people. He was lying to them, but he was trying to address income inequality in a way that appealed to people.”

While on their way to Brownsville for the kickoff event, Nixon’s team encountered subway delays. She told the AmNews that she used the delay to her advantage.

“It was an hour and a half trip that should’ve been 35 minutes,” said Nixon. “What that meant was that I was on the train for a long time and people recognized me and heard that I was running.”

Nixon spoke with multiple straphangers while waiting, which was chronicled on her representative’s Twitter page.

Face recognition won’t be a problem for Nixon. As a cast member of one of the most popular TV shows of the early 2000s (“Sex and the City”), which spawned a couple of feature films, she won’t struggle in the “getting to know you” department with voters. But Cuomo’s team has already told the public how they felt about Nixon’s challenge.

During a conference call last month, as rumors swirled of Nixon running, Cuomo joked that she was put up to it by New York City Mayor Bill de Blasio or Russian President Vladimir Putin.

“Normally name recognition is relevant when it has some connection to the endeavor,” said Cuomo to reporters. “If it’s just about name recognition, then I’m hoping Brad Pitt, Angelina Jolie and Billy Joel don’t get into the race.”

Nixon suggested that Cuomo not be a Democrat.

“If you call yourself a Democrat, but you slash taxes on corporations and defund our subways and you won’t help out with public housing and schools, I don’t think you want to be in the Democratic Party,” Nixon said. “We really want a progressive agenda. We want it now more than ever before. We need it from our leaders. The lack of progressive policies has really impacted a lot of people … especially people of color.”

Education, housing and fixing the subways are points of emphasis in the early stages of Nixon’s campaign. She said, “I don’t know the last time Cuomo was on the subway that wasn’t a photo op. Maybe he has no idea how bad it is.”

Nixon, a supporter of de Blasio, believes that Albany has the power to invest more in the subways, public housing and infrastructure overall.

“Cuomo likes to put money to things he can stand next to and get a good photo,” said Nixon. “But [the governor needs] to invest in the stuff you can’t see. We need to replace the signals [on the subways]. It’s the stuff that’s tripled our delays. We’ve invested an enormous amount in infrastructure and if we don’t maintain them, they’re gonna crumble before our eyes.”

But New York City isn’t New York State. There’s an entire swath of land and people that Nixon needs to cover, travel through and meet with. Nixon said she understands the task at hand and believes that those outside of the city have been hit with poverty in a unique way not understood by those in the five boroughs.

“We’ve got more than 50 percent of our kids in upstate cities living below the poverty line,” Nixon said. “We are feeling the lack of investment [in the city]. I think they’re feeling it even more. If we took back those billions of dollars in development money given to corporations and did it in a way where there was more government oversight and the community had input, we’d be in much better shape in terms of job creation.”

The media attributed much of President Donald Trump’s victory in 2016 to the working class feeling shut out of the American dream. With the loss of factory work and other traditionally blue-collar jobs, Trump provided them with a reason, sources, targets and justifications for their anger and frustration. In the mainstream, the working class skews white. Nixon told the AmNews that the government has to look elsewhere.

“The days of those middle class jobs … that’s not what working class jobs are nowadays,” said Nixon “Working class jobs are human service jobs and most of the jobs are filled by women and people of color. We’ve devalued those jobs. Those are jobs that don’t require us to build a factory. It requires a government to be proactive. Spend on expanding day care, programs that help kids stay in school, that stop the school to prison pipelines. Do interventions with people who really need it.”

But while Nixon articulates her platform to the masses, one elected wants to know why the now gubernatorial candidate wasn’t a fan of hers.

Former New York City mayoral candidate and Council Speaker Christine Quinn is a Cuomo supporter. Quinn told the New York Post that she wasn’t a fan of the actress supporting Bill de Blasio over her in the 2013 Democratic mayoral primary.

Quinn also pointed out that Nixon didn’t have any management experience and has never run an organization. She even questioned having a primary advocating for unity among Democrats. When asked by a reporter at her kickoff event to respond to Quinn questioning her credentials, Nixon said, “I think we need somebody who’s not a political insider.”

Nixon would be the first woman to govern the Empire State and the first openly gay one if she were to win.

Although Quinn took to Twitter to apologize, stating that she would never use someone’s identity against them and was only trying to show how Nixon vocally supported de Blasio over her despite her qualifications, Nixon used the criticism as a rallying cry when promoting a campaign kickoff party at the Stonewall Inn Wednesday.

“Calling all qualified and unqualified lesbians…,” read the beginning of her party announcement on Twitter.

Unions and other party officials were initially silent in the past few days since Nixon’s announcement. The gossip website TMZ caught up with Congressman Greg Meeks who said Nixon should start small and run for a more local office. Dom Leon-Davis, a communications associate for the Working Families Party, told the AmNews that they haven’t made any picks for endorsements but will keep an eye on things.

“Our endorsement in the governor’s race will be determined by our state committee, which comprises 232 labor, community and grassroots activists from across New York State,” said Davis in an emailed statement to the AmNews. “They’re watching the candidates closely and will decide which one best represents our values and will fight for and deliver on the issues that affect working families.”

Local resident Winsome Pendergrass was one of many in attendance at the campaign kickoff event. She told the AmNews about the issues that she wants her candidate of choice to cover. “Education is a big one,” Pendergrass said. “Health is another one and housing is my life blood because we have to live somewhere to be registered to vote and we’re dealing with a lot of hardship with the landlords.”

Pendergrass told reporters that Nixon’s speech gives people like her hope for a change in the way Albany does business. When asked if it made sense to have a celebrity for elected office, Pendergrass said, “If Donald Trump is in there, I don’t see why she can’t go.”

After her speech, Nixon stood surrounded by media members and took questions about her reasons for running.

“There’s been corruption in Albany for a long time and under the Cuomo administration, he’s bought it to a new high or a new low ... however you want to put it,” Nixon told the media scrum. “It’s time for an outsider. I’m not an Albany insider.”

Nixon continued, “We need people to speak up. The way African-American women did in Alabama, the way the kids did in Florida and the way all of the women who are running for office this year.”

Another local resident, Norman Frazier, told the AmNews that Cuomo hasn’t done a good job and is looking for someone he feels isn’t beholden to major campaign donors.

“Yes, I voted for Cuomo at the time,” Frazier said. “But I see that he wasn’t true with his word. Then I heard Cynthia’s ideas. If the election was today, I would vote for her today. When you take corporate money, they own you.”

When asked if Nixon being a wealthy person gives him pause, Frazier said that it wasn’t about her public notoriety.

After leaving the Bethesda Healing Center, Nixon—along with media members and a few supporters— walked over to the Sutter Avenue-Rutland Road stop on the 3 Train line. Announcements about delays blared over the speakers drowning out some of her answers to reporters’ questions.

But New Yorkers will hear a lot more from her in the next few months.