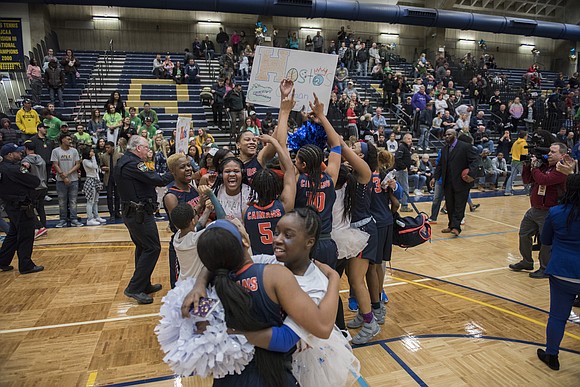 They were far from home. The Caimans had to play and win three games in three days. The championship game was played on their opponent’s home court. None of this, development fazed the players of Hostos Community College, who returned to the Bronx as NJCAA Division III Women’s Basketball Champions, the first national title in program history.

Hostos, which entered the tournament as the No. 2 seed, defeated top-seeded Rock Valley College 58-52. Although only a small contingent of family made the trip to Rockford, Ill., Hostos coach DeVernie Winston said the other teams in the tournament cheered them on.

“Because of all the work that we put in for the entire season, the players were so focused in knowing what was expected of them,” said Winston, who is in his third season at Hostos. “We did a couple of team bonding things throughout the week, but they were so focused the entire time.”

He added, “Our focus was to win a national championship. We had the players; we had everything in place. We just needed to make sure that we went out to execute. Winning a national championship happens from day one of the season. The mental, emotional and physical preparation—everybody buys into the system.”

Since arriving at Hostos, Winston, a Harlem native, treated his players with respect and high standards. Doing well in the classroom is a priority, so that when they receive the inevitable attention from four-year institutions that comes with a national title, the players are ready to take on that challenge.

“This title means everything to them because it shows that they can be the best. That’s in life. It’s not just on the basketball court,” said Winston. “It transcends the game of basketball. We try to prepare them for life. It means so much. They have someone that believes in them and now they believe in themselves.”

Freshman forward Kayla Wilson received NJCAA Division III National Player of the Year honors as well as NJCAA National Tournament MVP. This week she and her teammates are back in the classroom, and Winston is working for their futures.

“All of them will have the opportunity to play at [four-year] schools moving forward,” said Winston. “The No. 1 thing is getting our grades together and graduating our kids.”