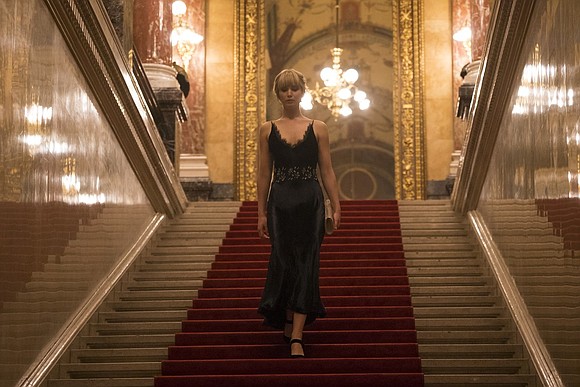 Russian prima ballerina Dominika Egorova (Jennifer Lawrence) has her dreams shattered when she suffers a career-ending injury during a performance. Her uncle (Matthias Schoenaerts) sees a future for her at the Sparrow School, a highly competitive, mind-altering training program for the nation’s secret intelligence service. One of her first assignments is to gain the confidences of CIA agent Nathaniel Nash (Joel Edgerton) and to undermine his efforts.

The problem with spy movies is that the formulas are always the same. The spies are is on a dangerous mission and neither they nor the viewers know who to trust. There’s a lot of backstabbing and undermining, violence and high-speed car chases.

Also, I have written before about the “open door” flaw in films—situations in which characters leave doors unlocked—situations where no one in their right minds would do so. But filmmakers set up scenes that way because they facilitate the story. Usually, these situations involve couples engaging in wholly secret, illicit sexual activities, but they nevertheless leave the doors to rooms where the activities take place unlocked, making it easy for someone to walk in and see them.

However, the one compelling aspect of the story is the sexual/sadistic training the students undergo at the Sparrow School. The point of the schooling is to teach agents to use all “tools” available to them in accomplishing their missions.

The cast, featuring Lawrence and Edgerton as stars, is effective and credible. But there is nothing really unique or special about the film.

It is difficult to give a cast diversity rating on a film set in Eastern Europe. Considering that setting, I’ll give “Red Sparrow” a “B” cast diversity. There are some people of color in minor supporting roles.

The movie is a lengthy experience at 160 minutes and is rated R for strong violence, torture, sexual content, language and some graphic nudity. Wait and rent this bird.