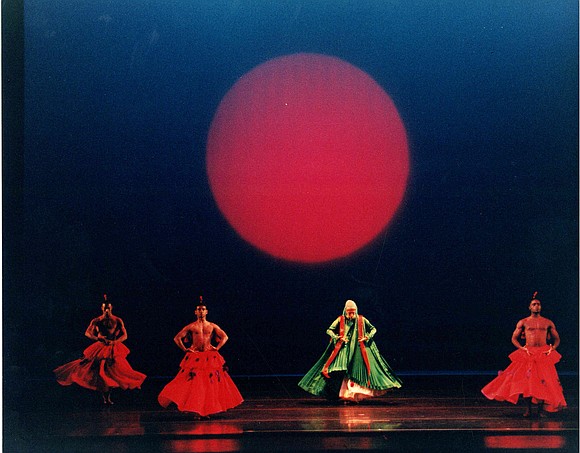 African drummers fill the air with compelling Caribbean rhythms. Dancers, male and female, appear dressed in floor-length skirts festooned with red balls accenting every movement of their swiveling hips. On the beat, dancers thrust one arm forward wagging an index finger as if to say, “You can’t touch this!” In an instant, we are mesmerized by the rhythmic, color-infused spectacle that is Geoffrey Holder’s masterful “Dougla” created for Dance Theatre of Harlem back in 1974 and now scheduled to be presented during the company’s upcoming City Center Season April 4 to April 7.

It’s been several years since DTH performed “Dougla,” and because Holder died some years back, remounting this dynamic ballet involved a process best described as a family affair.

“‘Dougla’ is genuinely a magnificent work,” said DTH Artistic Director Virginia Johnson. “And, it’s an immensely popular work, so everywhere we go on our extensive touring schedule we get requests for it.”

Because it was created when the DTH Company was a bit larger than it is today, Johnson said it was necessary to figure out how the company could perform “Dougla” in its current configuration. “It’s something I personally wanted to bring back,” she said, noting that the work truly satisfies a sense of spectacle and magnificence and it does so in such a simple way. “Geoffrey’s costumes are gorgeous and there’s a scenic element, with lighting, that creates such a unique atmosphere, so clearly ‘Dougla’ was something we could manage. Also, I certainly enjoyed dancing it all those years.”

Learning what went into this process makes it obvious that it takes a village to reconstruct such a magnificent ballet. Holder’s wife, Carmen de Lavallade, and son, Leo, came to rehearsals and shared memories and insights with dancers who missed the opportunity to work with the creative genius and artistic Renaissance man. Leo, tall and majestic like his dad, brought one of Geoffrey’s favorite pieces of jewelry, a large turquoise stone necklace, so the dancers could feel his presence. Others participating in this magical process included former DTH principals Charmaine Hunter, Donald Williams, ballet masters and former company members Keith and Kellye Saunders. Also, former DTH principal Kevin Thomas made it possible for four men and four women from his Memphis-based company, Collage Dance Collective, to join DTH for the upcoming New York performance of “Dougla.” And, for icing on the cake, Cuban-born composer, conductor and former DTH Music Director Tania Leon will conduct the group of master drummers accompanying “Dougla,” a group that includes some who performed when the piece originally premiered.

Describing the process of reconstructing the work, Donald Williams said, “‘Dougla’ is wonderful steps and Geoffrey uses them brilliantly, but it’s so much more than the steps. It’s about where the steps come from. What’s the motivation behind them? That’s Geoffrey. That’s how you pass that on.” He was referring to the attitude and swagger that makes “Dougla” special.

Recalling what it was like to work with Holder, Williams recalled how the 6-foot-2 force of nature would stride into the studio and, in his deep Trinidadian baritone, summon the dancers by saying, “Come babees. We’re going to have a good rehearsal today. I want you to say with me together, ‘I’m young, I’m young, I’m young.’ Now go and give me everything. Full out with feeling, Babees!”

The excitement of two current company members who will bring this masterpiece back to life is palpable. Lindsay Croop said she’s thrilled to be dancing the commanding role of the lady in green. Da’Von Doane, whose brilliant technique will shine as the groom, says the stories and anecdotes have played a major role in enhancing his understanding of Holder’s handsomely produced Caribbean folk suite.

Although “Dougla” is a much-anticipated feature of the City Center Season, it is not the only work that promises to make the season special. Others include classic and contemporary works, premieres and revivals that commemorate the 50th anniversary of the assassination of Dr. Martin Luthier King Jr., with the organization’s annual Vision Gala, honoring dance legend Carmen de Lavallade and civil rights icon Xernona Clayton. In addition to Holder’s masterful work, the season features four programs of works by such legendary and celebrated choreographers as Christopher Wheeldon, Marius Petipa, Darrell Grand Moultrie and the late, great George Balanchine.

“Dance Theatre of Harlem’s 2018 New York City Center programming beautifully reflects our goal of celebrating the future while honoring the past,” Johnson said. “From the joyous and soulful ‘Harlem on My Mind’ by Darrell Grand Moultrie, to Marius Petipa’s breathtaking and dynamic ‘Le Corsaire.’ The melding of what’s been and what’s to come in DTH’s first collaboration with Christopher Wheeldon with ‘This Bitter Earth,’ to a company premiere of George Balanchine’s ‘Valse-Fantaisie,’ and the long-awaited revival of my dear late friend Geoffrey Holder’s ‘Dougla,’ along with our own Robert Garland’s ‘Braham’s Variations’ and Dianne McIntyre’s ‘Change’ at the opening night Vision Gala performance—with our neighbors, friends and fellow dance lovers this spring. At DTH, the movement, which began over 49 years ago, continues.”