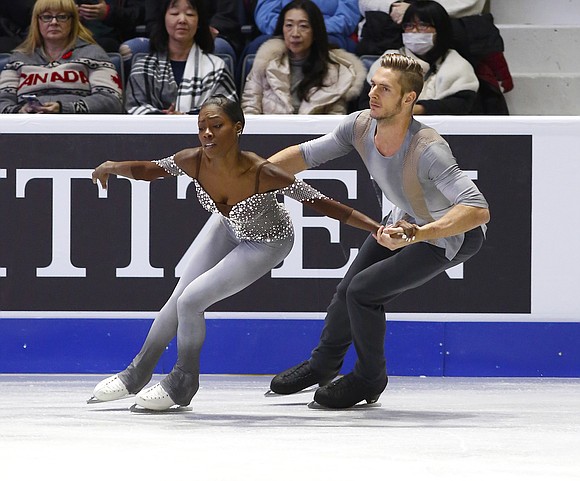 It has been a long and challenging skating season, but French pair skaters Vanessa James and Morgan Ciprès finished on a high note by winning the bronze medal at the 2018 World Figure Skating Championships, held last week in Milan, Italy. This win marks the first World medal for a Black female skater since Surya Bonaly in 1995. Making it all the more incredible, Ciprès suffered a back injury shortly after their fifth-place finish at the Olympic Winter Games in PyeongChang, South Korea, but recovered thanks to physical therapy.

After the European Championships, where they finished a disappointing fourth after leading the short program, James, 30, and Ciprès, 26, returned to last year’s freeskate set to “Sounds of Silence” sung by the band Disturbed. Although James fell on a throw early in the program at Worlds, the pair rebounded beautifully.

“It’s been a tough [year] with injuries, but we prevailed,” said the duo’s coach, John Zimmerman. “It ended up exactly where we wanted to be for Worlds.”

“It’s something we always dreamed of, but we weren’t sure it was realistic or attainable,” said James of the World medal. “All the ups and downs and missing the podium at the European Championships was a learning experience for me. It’s a hard hit to take when you can’t make the podium, but you learn a lot from it. With this fall, I knew I had to fight from then on. Thank goodness, I had those experiences before and composed myself for the rest of the program.”

She said sharing the medal winning experience with Ciprès was beautiful, and she was touched by his emotional reaction. “We’ve come so far from where we started,” James said.

After the World Championships, James and Ciprès headed to France, where they will perform in shows with other members of the French team. Then some vacation time with her parents, who live in Virginia, and then back into training in Florida with an eye toward competing next season.

“It would be a shame if we stopped,” she said. “If our heads are in it and the bodies follow, we will definitely go for it.”

James takes pride in being a visible role model for aspiring skaters of color, and was so pleased that her parents, grandfather, aunt, uncle and cousins were present at the World Championships. Ciprès’ grandparents and aunt also attended.

“It was an amazing experience because our families were there for our first World medal,” said James. “It was really cool.”