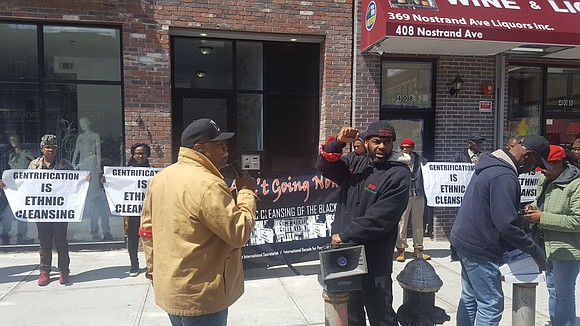 Protesters organize in front of a new building in Bed-Stuy, Brooklyn Odili Obi

The battle against “ethnic cleansing” is intensifying on the sidewalks of Bedford-Stuyvesant, Brooklyn. For several months community members have organized and protested in front of 410 Nostrand Ave., a newly constructed building slated for high end condominiums in the middle of a predominantly Black working class neighborhood. Under the banner of “We Ain’t Going Nowhere!” neighborhood residents are demanding affordable housing. The ethnic cleansing and increasing rents have been pushing out people who have lived in the area for years, but the resistance is escalating every day.

Last Sunday afternoon realtors held their first open house at 410 Nostrand and were met with a boisterous contingent of activists standing their ground, complete with banners, placards and bullhorn.

They chanted, “We ain’t going nowhere,” “Do or die Bed-Stuy,” “Housing is a human right” and “Whose streets? Our streets” as a tentative and reluctant slow stream of white newcomers made their way into the building or just turned around and left altogether.

“We have been consistently demonstrating in front of this building in order to teach our people that gentrification is in fact ethnic cleansing,” said a young man named Robert. “We have to understand, as a people, that we can’t act as individuals anymore. All of us are experiencing the same thing. Our people are disappearing and finding themselves in shelters as they still go to work every day. It is pure greed. The landlords, brokers and the major financial institutions that bankroll them and give them their marching orders only think of their profits and to hell with humanity. We have to resist. We have no choice.”

The group meets regularly to plan, research and organize their strategy and tactics. They held a major We Ain’t Going Nowhere Tribunal and Hearing that was filled to capacity at Bedford Stuyvesant Restoration Plaza in March. Documentation has already been submitted to the United Nations Human Rights Council in order to expose the United States’ human rights abuses against African people.

“There are many buildings just like this throughout the community and the country,” explained Iman Essiet, a 26-year-old resident. “We could have picked any one of them. We plan to move around to more buildings. Many of them are really not even safe. They are not adhering to codes and regulations for habitat. We have to pay attention. Regular working class people are bearing the brunt of this blatant economic exploitation. We must stand together and never give up. This is our community. My family has lived here for more than 50 years. We have to fight back now before it’s too late.”

Bedford-Stuyvesant is one of the most affected communities being transformed by ethnic cleansing. The organizers ask that you get involved now. For more information, contact the December 12th Movement We Ain’t Going Nowhere Group at 718-398-1766, D12M.com or weaintgoingnowheretribunal@gmail.com.