Cosmopolitan Review: May 3 - May 9 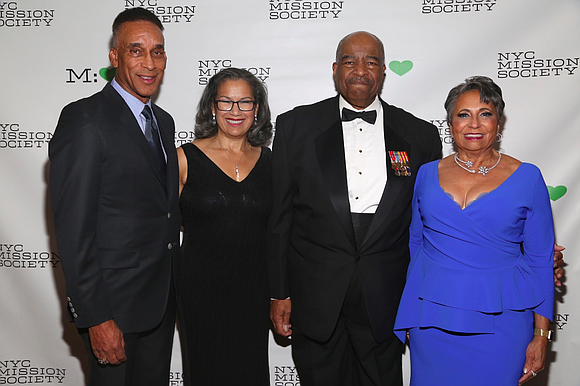 While strolling through the park one day, in the merry, merry month of May, I was taken by surprise by a pair of roguish eyes, in a moment my poor heart was stole away (music and lyrics by Ed Haley). May Day, Cinco de Mayo, lilacs and gardenia plants, Northside Center’s annual gala, the official start of the summer social season, Memorial Day weekend—it’s all about to open.

Also happening was the 2018 New York City Mission Society Champions for Children Gala, held at the Mandarin Oriental ballroom. Complete with cocktail hour, dinner, presentations and dancing, this event had to be one of the most engaging galas of the season. It was as inspirational as it was entertaining. The excitement was raised right from the beginning as honorees graced the red carpet. Those having photo ops with Mission Society President Elsie McCabe Thompson, wife of Bill Thompson, included Cathy Hughes, who received the Lifetime Achievement Award, Mannie Jackson, who received the Dina Merrill Hartley Public Service Award, and gala Co-Chairs Katrina Peebles, Jean Shafiroff and Leah Rumbough.

Guests were ushered into the ballroom for dining to the drumming provided by the students of the New York City Mission Society GRIOT music program, followed by Alex Donner & His Orchestra. Master of ceremonies for the evening, with opening remarks, was longtime supporter WABC news anchor Bill Ritter. Special recognition was given to LTC Francis W. Kairson Jr. (Ret.), director emeritus, who recounted his early days as a participant of the Mission Society programs and camper at Camp Minisink. If you grew up in Harlem, you knew of Camp Minisink and of it being the highlight of the summer.

Kairson is a fine example of the type of character the Mission Society can build. Born and raised in New York City, he attended public schools before heading off to Howard University and Baruch College, earning degrees in electrical engineering and business administration. In 1968, he joined the U.S. Army and in a career of more than 28 years, he rose through the rank to lieutenant colonel, retiring in 1996. Among his many awards Kairson received the Black Heritage Civic Award from the New York branch of the NAACP. In 2009, he and his wife Barbara founded Franbar Associates, LP., which provides consultancy services in program evaluation, leadership training, proposal/grant-writing and development of community outreach programs. He is a member of the 100 Black Men Inc., Tuskegee Airmen Association and Veterans of Foreign Wars.

Auctioneer, Hugh Hildesley, vice president of Sotheby’s, raised oodles for the cause as McCabe Thompson gave thanks for the support given over the years through the generations that has kept the NYC Mission Society thriving for more than 200 years. She also announced to the audience plans for the launch of the Minisink Charter School, which will be located in Central Harlem. According to McCabe Thompson, “The Minisink Charter School will offer a unique educational experience with small class sizes and standards-based, experiential learning, where each child is offered individual attention enabling them to achieve academic success. It will be a place where families are engaged in their children’s educational journey. This is an exciting, new chapter where we can truly shape even grander outcomes for our children.”