In a rhythm with Bebe Miller 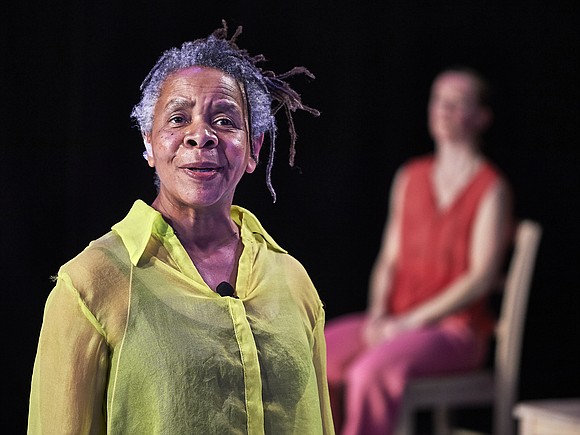 Bebe Miller is a New York treasure and, for decades now, one of New York’s really curious dance makers. Her most recent quest was to dig deep into the dance-making process with a partner. The result is “The Making Room Project,” a yearlong meeting of the minds with Susan Rethorst, a contemporary in the dance field.

“The Making Room Project” is built on spending time together, sharing and discussing respective methods on the creative process from the beginning to the premiere. During the process, audiences were invited into the rehearsals, the showings and an online portal. In addition, an e-book will be launched in June 2018. Their year together ended in a shared evening at New York Live Arts (Feb. 21-Feb. 24). Rethorst presented “Stealing From Myself” and Miller presented “In a Rhythm.”

Gregory Holt and Gabrielle Revlock danced Rethorst’s playful “Stealing From Myself,” a journey through 30 years of her dance-making, her relationship with books and some thoughts behind words and how they elevate our impressions. Miller’s brilliant 70-minute “In a Rhythm,” an equally reflective look at words, their meaning and syntax as they pertain to dance-making and her stance of myriad issues, followed.

From the start, Miller drew the audience in by breaking the fourth wall and begged us to question some of life’s tacit tales that might be familiar. Then, blow-after-blow, she assesses words from David Foster Wallace and Gertrude Stein, the white artist Dana Schutz’s skewed response to the purposely open casket viewing of 14-year-old African-American Emmitt Till, lynched in Mississippi, titled “Open Casket” (2016); the rapper Nelly’s tenuous position amid charges of sexual assault; and Toni Morrison’s crisp interview with Charlie Rose about her choice in writings on “race.”

Between these soulful blows, mixing syntax in words and movement, two responses stand out. First there’s Crystal Brown and Trebien Pollard’s spot-on duet against Nelly’s salacious “Country Grammar” that slipped in and out of Miller’s joint-initiated “downtown” dance moves—going head-to-head with spicy social dance (twerking and more) sequences. Miller’s “downtown” later meets Motown when Michele Boulé seized the underbelly of the mixing in her solo to Donny Hathaway’s “I’ll Love You More than You’ll Ever Know.” Too bad this show-stopper had to come to an end because Boulé was simply hypnotic.

The other dancers, Sarah Gamblin, Angie Houser and Bronwen MacArthur, effortlessly translate Miller’s syntactical blending of movement and word, and bring her curiosity to light. The seasoned Miller, who joined them infrequently, each time would so easily wrap all ideas into a pool of understanding, no matter what—plus she always stands out.

What’s next Bebe Miller? Who will be your partner? We are as curious as you and we want to know!