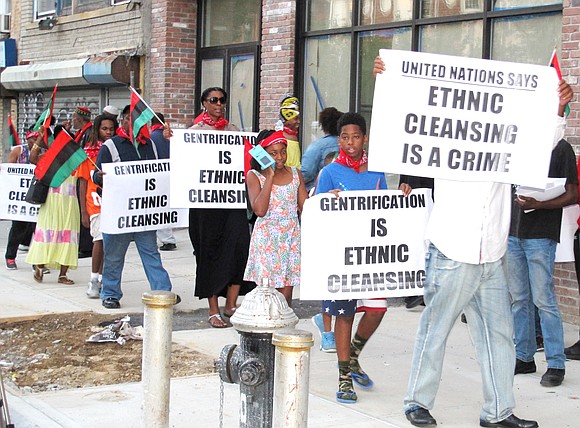 Ethnic cleansing is an international human rights violation. Black people across the U.S. are being ethnically cleansed from our traditional communities. If Black folks accept the myth that the devastation inflicted on us by “gentrification” is simply the result of neutral “market forces,” we will fatally underestimate the danger we face as a people.

Whenever white folks say that the “gentrification” of Black communities is not about race but economics, get your guard up. The entire history of the United States demonstrates the inextricable connection between economics and race. Colonialism and developing capitalism reduced Africans into things, commodities to be bought, sold and to create profit. European “Christians” invented the concept and ideology of racism—of white supremacy and Black inferiority—to rationalize the practice of slavery. Economics lies at the very root of racism.

If you want to destabilize a community, you attack its housing base. As one of the presenters at the March 3 “We Ain’t Going Nowhere Tribunal on Ethnic Cleansing of the Black community” observed, when you do not have a residence, it is almost impossible to concentrate on or fight to improve any other aspect of your life. So the process of so-called gentrification—inflated purchase prices for homes; building of poorly constructed, new high-rises with rents unaffordable to the present working-class community members; and increased rents in the entire area—is presented as non-violent in intent, but violent in result. In fact, one of the new tactics being used in our communities is the rise of Airbnb, the transformation and elimination of resident housing into day-to-day/week-to-week commercial hotel transactions. This important component in the ethnic cleansing of the Black community can be further seen through its documentation by Inside Airbnb’s released study “Faces of Airbnb: NYC, Airbnb as a Racial Gentrification Tool”:

The loss of housing and neighborhood disruption caused by Airbnb is six times more likely to affect Black residents, based on their majority presence in Black neighborhoods, as residents in these neighborhoods are 14 percent white and 80 percent Black.

The problem is compounded by the driving out of small, community-based businesses; the attack on community institutions (e.g., complaints about Sunday church bells being “too loud,” drum circles being too “noisy”); the education “solution” of Charter schools for a fortunate few and under-resourced public schools for the many); the police terrorizing and killing of Black residents; and the easy availability of weapons.

This problem is not simply a Harlem or a Bedford-Stuyvesant problem. Although the tactics might vary, the same process is going on across the country, with examples in Boston, Detroit, Chicago, Houston, San Francisco and even Portland. We must not forget that in New Orleans it was not Hurricane Katrina, but the man-made manipulation of that natural disaster, that has reduced New Orleans’ Black population from 75 percent to 50 percent.

Like the subprime mortgage scam that led to the economic bust in 2008, the use of “gentrification” to disguise the ethnic cleansing of our communities is a valuable and necessary process for the ruling class. It is driven by the sole reason for being of capitalism—maximum profit. The banks (e.g., JPMorgan Chase, Goldman Sachs, Wells Fargo) and real estate interests are the key players in this scenario. From their perspective, it is imperative that Black people first be dispersed because we occupy strategic sections of urban areas necessary to create housing for elite workers for whom the suburb commute is no longer viable; we have outlived our profit-making usefulness to the 21st century capitalist economy (i.e., the high-tech, increasingly automated service economy doesn’t need us in large numbers. Now the only area we consistently create profit is in prisons, where slavery is still legal under the Thirteenth Amendment to the U.S. Constitution); and it is more difficult for Black people to organize resistance when we are spread out. Defenders of gentrification argue that racial dispersion is not their intent. But the undeniable fact is that the “result” of this process produces ethnic cleansing of Black people.

For those Black folks who remain unconvinced, who, in the Age of Trump, maintain a belief in the “Democracy” of the U.S., of their rights as citizens and therefore hesitate to participate in the growing resistance to ethnic cleansing please take heed of the fact that we have a responsibility to learn from history and not repeat it.

Two important lessons: (1) The genocide practiced against the Native-American people in early North America was preceded by the systematic ethnic cleansing of their nations and communities across America. (2) Remember scholar Jelani Cobb’s observation after President Bush described displaced Black New Orleanians as “refugees.”  Cobb noted, “Katrina can be viewed as the first of a series of crises that seem to have become a referendum on Black citizenship.”

It is not just our citizenship, but our very existence that is up for question. We are very clear that ethnic cleansing is a key component of genocide.