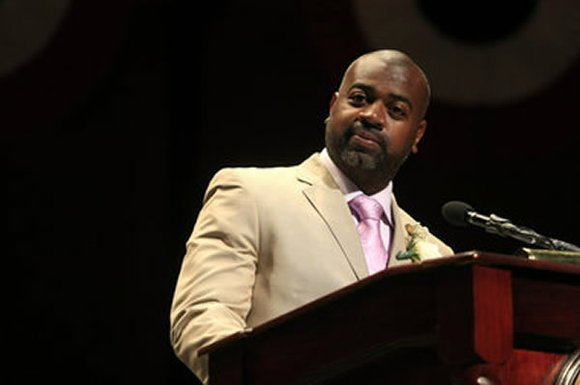 “Touchdown” was the word of the night as Newark Mayor Ras Baraka won a second term in a landslide, taking nearly 77 percent of the vote Tuesday.

Baraka’s only challenger was Councilwoman Gayle Chaneyfield Jenkins, who won 22 percent of the vote. The re-elected mayor, who’s been in office since 2014, held his victory party at the Robert Treat Hotel. Touting his track record in New Jersey’s largest city, he called his win a win for the Brick City.

“Despite what people try make you believe, you can see what’s happening in Newark,” Baraka said. “We never said it was perfect ... we never said things couldn’t get better, all we said was that we were moving in the right direction.”

Throughout the campaign, Baraka was a favorite maintaining a steady lead in polls. He received major endorsements from large unions, including 32BJ, RWDSU and the Fraternal Order of Police.

He also highlighted his ability to create jobs for the city attracting major companies. Online retailer Amazon has Newark on its shortlist for its new headquarters that could bring 50,000 jobs to the city.

Along with increasing jobs, Baraka centered on three other pillars during his campaign, including lowering crime, improving education and creating affordable housing.

During his second term, Baraka said hae wants to focus on continued success in the city in all areas he campaigned on. The Newark Police Department recently implemented a citywide asurveillance program in which residents can observe images from cameras placed throughout the city on their computers. He’s also tackling the issue of high school absenteeism by holding a symposium on the issue.

“This community is not divided,” Baraka said. “This is unity. This city is together. Newark is united. We’re all going to be here together. You are not my enemy.”