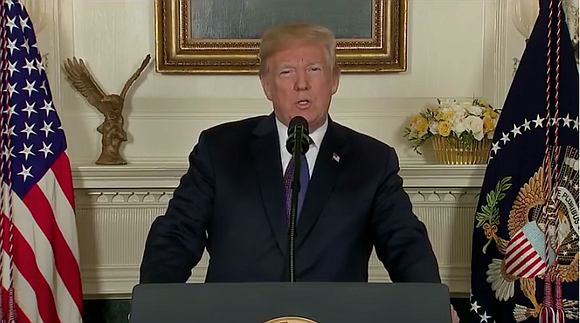 As he has promised almost from the inception of his presidential bid, Trump has withdrawn the U.S. from the Iran nuclear deal.

The decision to withdraw was made over the weekend, according to sources familiar with the discussions. While Trump was delivering the news via telephone to French President Emmanuel Macron and Chinese President Xi Jinping, on Monday Vice President Mike Pence was on Capitol Hill informing members of Congress.

“It is clear to me that we cannot prevent an Iranian nuclear bomb under the decaying and rotten structure of the current agreement,” Trump announced from the White House Diplomatic Room. “The Iran deal is defective at its core. If we do nothing we know exactly what will happen.”

Trump also said he would initiate new sanctions on the regime, thereby completely nullifying the agreement by President Obama. He promised that any country that chooses to help Iran would also face sanctions. “This was a horrible, one-sided deal that should have never, ever been made. It didn’t bring calm, it didn’t bring peace, and it never will.”

He said the deal was “an embarrassment” and while Iran was pocketing beaucoup dollars from the U.S., it was sponsoring terrorist activity in other regions of the globe.

It could take months before the sanctions go into effect as the U.S. government develops guidance for companies and banks. The accords were in place to curb Iran’s nuclear capacity, but Trump decided that this week was an opportune time to end the deal, which caught many elected officials and international leader by surprise.

Macron and Chancellor Angela Merkel of Germany expressed their disappointment—both had asked Trump to keep the deal in place. The news leaves a number of European nations in a quandary.

The withdrawal was good news to the GOP, but Democrats who backed the deal characterized Trump’s move as a violation of the agreement that could lead to disaster. Sen. Chuck Schumer, who voted against the deal in 2015, said Trump should remain in the deal because there was no evidence, in his view, that Iran had violated the terms of the deal, and said that the Trump administration has no alternative plan. “They don’t have a real plan here,” Schumer said of Trump and his team.

Senate Minority Whip Dick Durbin, D-Ill., said the “last thing American and the world need right now is a new nuclear threat. Breaking this deal increases the danger that Iran will restart its nuclear weapons program, which threatens our ally, Israel, and destabilizes the entire Middle East. It isolates the U.S. from the world at a time when we need our allies to come together to address nuclear threats elsewhere, particularly in Korea. This is a mistake of historic proportions.”