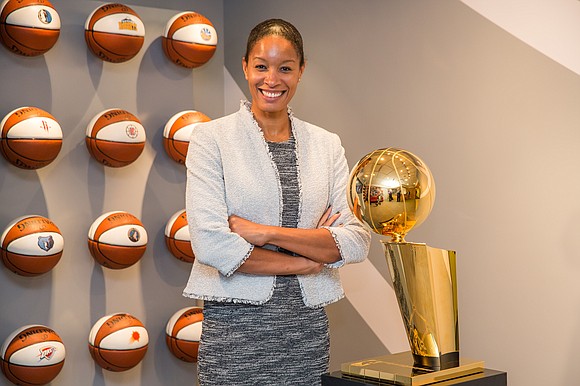 Although Bethany Donaphin played just a season and a half with the New York Liberty, she made an indelible impact with a buzzer-beating basket in the deciding game of the 2004 playoffs that sent the Liberty to the Eastern Conference Finals. She was also the first native New Yorker to be a Liberty starter.

Last week, Donaphin, who was born and raised in Harlem, returned to a Liberty practice in her new role as head of WNBA league operations. After serving as associate vice president of NBA basketball operations since September 2016, Donaphin was recently promoted to her WNBA position. It involves overseeing on-court basketball operations, playing rules, scheduling and venue compliance.

“The things that make the game go and the things that support the technology around the game as well. Adjacent to that collaboration is a look at how analytics and strategy can help us to continue to bring the game forward,” said Donaphin, who played professionally overseas for six years after graduating from Stanford University in 2002.

“Being back in New York, where I grew up and where I became a Liberty fan at the inception of the league and was inspired by that team to want to become a professional athlete, is really meaningful to me,” she said.

Donaphin’s visit to the Liberty involved her role in player development. She understands the transition to life after pro basketball. After deciding against her original plans to go to law school, several internships made her opt instead for business school. She received her MBA from Wharton School of Business in 2012, focusing on operations management.

“Obviously, there are some things that translate, like teamwork, work ethic, discipline and leadership, but you still have to kind of develop skills from the ground up,” Donaphin said. “In this new role, having a chance to connect with the players and have them know that there’s somebody in the league office that understands their perspective and has been in their shoes, I wanted to go to [the Liberty] and meet them.”

She added, “It is important to me that we’re infusing the players’ voice through the decisions that we’re making about both business and basketball. That’s the team that I played on, so it’s fitting that’s the first team I got to meet in this role. I intend to do that with 11 other teams this season.”