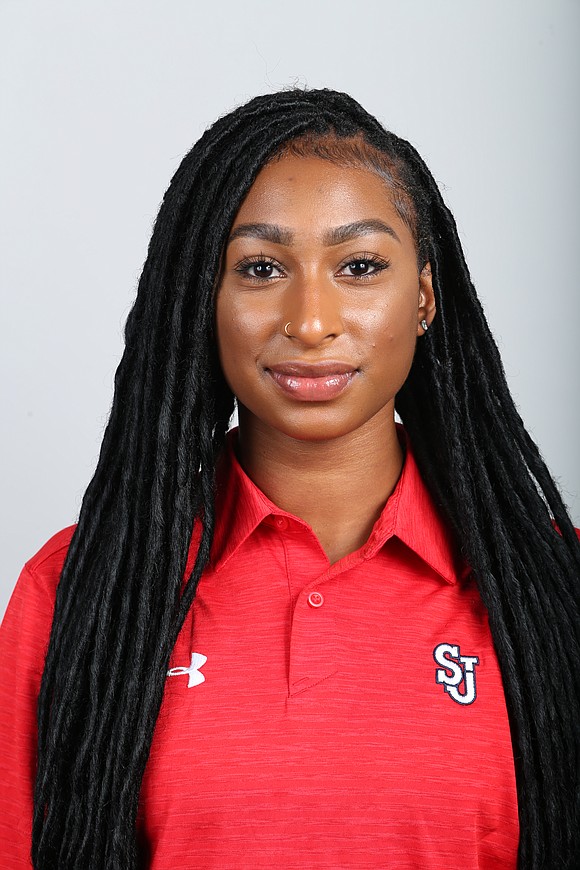 Long jumper Erica Graham and sprinter Maya Stephens of St. John’s University will compete at the 2018 Division I NCAA Preliminary Championships in Tampa, Fla., held May 24-26. The two senior student-athletes both won individual titles at the recent Big East Outdoor Track and Field Championships and were named All-Big East.

Graham, who grew up in Atlanta, began training in track at age 8 and became serious about the long jump during her junior year of high school. She chose St. John’s because she wanted to experience a new environment.

“I wanted something that could push me and I wanted that sense of being on my own,” said Graham. “I wanted to have courage without relying on my parents and explore the opportunities here in New York. I also had an interest in sports communication, and I felt like the best thing to do was to come here.”

She was initially a walk-on with the Red Storm and readily admits making the transition to the collegiate level was challenging. Graham persevered and earned an athletic scholarship after winning the Big East long jump title her sophomore year.

“I knew I had to push myself,” she said. “I knew my capabilities and I had to work hard to get there.”

She has enjoyed a solid collegiate career and has been named to the Big East All-Academic team, but she has truly hit her stride in the closing weeks of her senior year. Graham credits faith, hard work and positive thinking.

“I wrote down my goals; I knew what I wanted to do and I worked hard to get there,” said Graham, who graduated last Sunday. “Making All-Big East means everything to me. I tried to maintain a good track career as well as a good academic career.”

She has been a sprinter in the past and still trains in sprinting to improve technique. “The height and lift of your jump, you have to be fast on the runway,” said Graham, who studied videos of sprinter/long jumper Tianna Bartoletta.

Going forward, Graham hopes to earn a spot in the NCAA D I Track and Field Championships, which will take place in Eugene, Ore., in June. After that, she hopes to pursue a pro track and field career. She is also interested in sports broadcasting. Although Graham never grew accustomed to cold winters and snow, she loved her four years in New York.

“The fast-paced atmosphere,” Graham said. “It pushes you to get things done.”